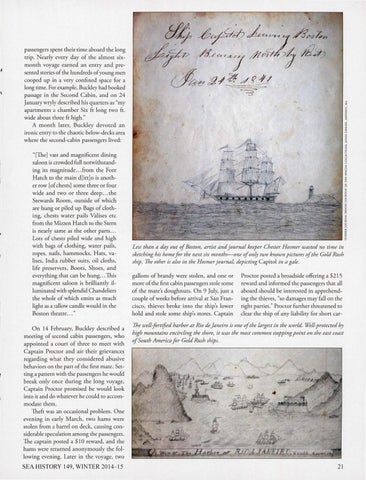 passengers spenr their time aboard the long trip. Nearly every day of the almost sixmonrh voyage earned an enrry and presenred stories of the hundreds of young men cooped up in a very confined space for a long time. For example, Buckley had booked passage in the Second Cabin, and on 24 January wryly described his quarters as &quot;my apartmenrs a chamber Six ft long rwo ft. wide about three ft high.&quot; A monrh later, Buckley devored an ironic enrry to the chaotic below-decks area where the second-cabin passengers lived: &quot;[The] vast and magnificenr dining saloon is crowded full norwithstanding its magnitude ... from the Fore Hatch to the main d[itt]o is another row [of chests] some three or four wide and rwo or three deep ... the Stewards Room, outside of which are hung or piled up Bags of clothing, chests water pails Valises etc from the Mizzen H atch to the Stern is nearly same as the other parts ... Lots of chests piled wide and high with bags of clothing, water pails, ropes, nails, hammocks, Hats, valises, India rubber suits, oil cloths, life preservers, Boots, Shoes, and everything that can be hung ... This magnificent saloon is brilliantly illuminated with splendid Chandeliers the whole of which emits as much light as a tallow candle would in the Boston theatre ... &quot; On 14 February, Buckley described a meeting of second cabin passengers, who appointed a court of three to meet wirh Captain Proctor and air their grievances regarding what they considered abusive behaviors on the part of the first mate. Setting a pattern with the passengers he would break only once during the long voyage, Captain Proctor promised he would look inro it and do whatever he could to accommodate them. Theft was an occasional problem. One evening in early March, rwo hams were stolen from a barrel on deck, causing considerable speculation among the passengers. The captain posted a $ 10 reward, and rhe hams were returned anonymously the following evening. Later in the voyage, rwo

Less than a day out of Boston, artist and journal keeper Chester Hosmer wasted no time in sketching his home for the next six months-one ofonly two known pictures ofthe Gold Rush ship. lhe other is also in the Hosmer journal depicting Capitol in a gale.

gallons of brandy were stolen, and one or more of the first cabin passengers stole some of the mate&#39;s doughnuts. On 9 July, just a couple of weeks before arrival at San Francisco, thieves broke into the ship&#39;s lower hold and stole some ship&#39;s stores. Captain

Proctor posted a broadside offering a $215 reward and informed the passengers that all aboard should be inrerested in apprehending the thieves, &quot;so damages may fall on the right parties.&quot; Proctor further threatened to clear the ship of any liability for short car-

lhe wellfortified harbor at Rio de Janeiro is one ofthe largest in the world. Well-protected by high mountains encircling the shore, it was the most common stopping point on the east coast ofSouth America for Gold Rush ships.