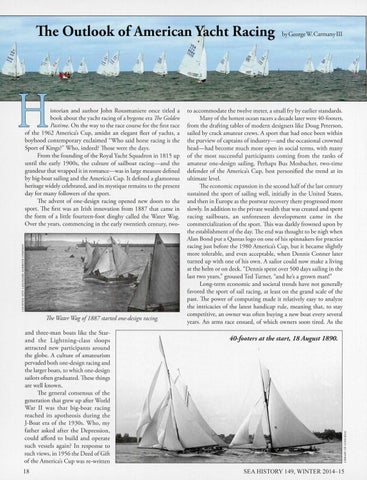 The Outlook of Americru:~~~cht Racing

istorian and author John Rousmaniere once titled a book about the yacht racing of a bygone era The Golden Pastime. On the way to the race course for the first race of the 1962 America&#39;s Cup, amidst an elegant fleet of yachts, a boyhood contemporary exclaimed &quot;Who said horse racing is the Sport of Kings?&quot; Who, indeed? Those were the days . From the founding of the Royal Yacht Squadron in 1815 up until the early 1900s, the culture of sailboat racing-and the grandeur that wrapped it in romance-was in large measure defined by big-boat sailing and the America&#39;s Cup. Ir defined a glamorous heritage widely celebrated, and its mystique remains to the present day for many fo llowers of the sport. The advent of one-design racing opened new doors to the sport. The first was an Irish innovation from 1887 that came in the form of a little fourteen-foot dinghy called the Water Wag. Over the years, commencing in the early rwentierh century, rwo-

The Wtiter Wtig of 1887 started one-design racing. and three-man boars like the Starand the Lightning-class sloops attracted new participants around the globe. A culture of amateurism pervaded both one-design racing and the larger boats, to which one-design sailors often graduated. These things are well known. The general consensus of the generation that grew up after World War II was that big-boat racing reached its apotheosis during the J-Boat era of the 1930s. Who, my father asked after the Depression, could afford to build and operate such vessels again? In response to such views, in 1956 the Deed of Gift of the America&#39;s Cup was re-written 18

to accommodate the rwelve meter, a small fry by earlier standards. Many of the honest ocean racers a decade later were 40-footers, from the drafting tables of modern designers like Doug Peterson, sailed by crack amateur crews. A sport that had once been within the purview of captains of industry-and the occasional crowned head-had become much more open in social terms, with many of the most successful participants coming from the ranks of amateur one-design sailing. Perhaps Bus Mosbacher, rwo-time defender of the America&#39;s Cup, best personified the trend at its ultimate level. The economic expansion in the second half of the last century sustained the sport of sailing well, initially in the United States, and then in Europe as the posrwar recovery there progressed more slowly. In addition to the private wealth that was created and spent racing sailboats, an unforeseen development came in the commercialization of the sport. This was darkly frowned upon by the establishment of the day. The end was thought to be nigh when Alan Bond put a Qantas logo on one of his spinnakers for practice racing just before the 1980 America&#39;s Cup, bur it became slightly more tolerable, and even acceptable, when Dennis Conner later turned up with one of his own. A sailor could now make a living at the helm or on deck. &quot;Dennis spent over 500 days sailing in the last rwo years,&quot; groused Ted Turner, &quot;and he&#39;s a grown man!&quot; Long-term economic and societal trends have not generally favored the sport of sail racing, at least on the grand scale of the past. The power of computing made it relatively easy to analyze the intricacies of the latest handicap rule, meaning that, to stay competitive, an owner was often buying a new boat every several years. An arms race ensued, of which owners soon tired. As the