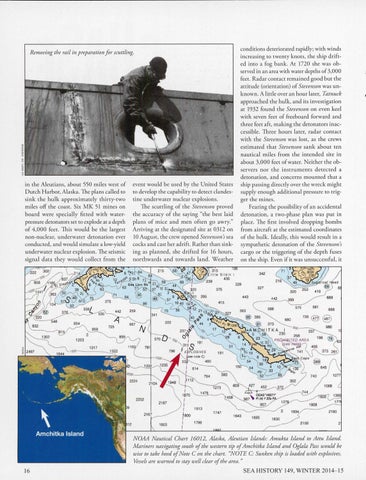 Removing the rail in preparation for scuttling.

in the Aleutians, about 550 miles west of Dutch Harbor, Alaska. The plans called to sink the hulk approximately thirty-two miles off the coast. Six MK 51 mines on board were specially fitted with waterpressure detonators set to explode at a depth of 4,000 feet. This would be the largest non-nuclear, underwater detonation ever conducted, and would simulate a low-yield underwater nuclear explosion. The seismic signal data they would collect from the

event would be used by the United States to develop the capability to detect clandestine underwater nuclear explosions. The scuttling of the Stevenson proved the accuracy of the saying &quot;the best laid plans of mice and men often go awry.&quot; Arriving at the designated site at 0312 on 10 August, the crew opened Stevenson&#39;s sea cocks and cast her adrift. Rather than sinking as planned, she drifted for 16 hours, northwards and towards land. Weather

conditions deteriorated rapidly; with winds increasing to twenty knots, the ship drifted into a fog bank. At 1720 she was observed in an area with water depths of3,000 feet. Radar contact remained good but the attitude (orientation) of Stevenson was unknown. A little over an hour later, Tatnuck approached the hulk, and its investigation at 1932 found the Stevenson on even keel with seven feet of freeboard forward and three feet aft, making the detonators inaccessible. Three hours later, radar contact with the Stevenson was lost, as the crews estimated that Stevenson sank about ten nautical miles from the intended site in about 3,000 feet of water. Neither the observers nor the instruments detected a detonation, and concerns mounted that a ship passing directly over the wreck might supply enough additional pressure to trigger the mines. Fearing the possibility of an accidental detonation, a two-phase plan was put in place. The first involved dropping bombs from aircraft at the estimated coordinates of the hulk. Ideally, this would result in a sympathetic detonation of the Stevenson&#39;s cargo or the triggering of the depth fuses on the ship. Even if it was unsuccessful, it 342 228 327 443