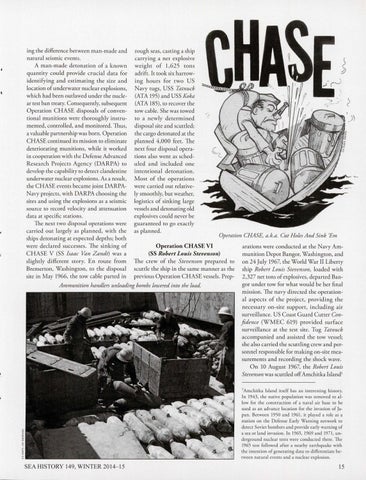 ing the difference between man-made and natural seismic events. A man-made detonation of a known quantity could provide crucial data for identifying and estimating the size and location of underwater nuclear explosions, which had been outlawed under rhe nuclear test ban treaty. Consequently, subsequent Operation CHASE disposals of conventional munitions were thoroughly instrumented, controlled, and monitored. Thus, a valuable partnership was born. Operation CHASE continued its mission to eliminate deteriorating munitions, while it worked in cooperation with the Defense Advanced Resea rch Proj ects Agency (DARPA) to develop the capability to detect clandestine underwater nuclear explosions. As a result, the CHASE events became joint DARPANavy projects, with DARPA choosing the sites and using the explosions as a seismic source to record velocity and attenuation data at specific stations. The next two disposal operations were carried out largely as planned, w ith the ships detonating at expected depths; both were declared successes. The sinking of C HASE V (SS Isaac Van Zandt) was a slightly different story. En route from Bremerton, Washington, to the disposal site in May 1966, the tow cable parred in

rough seas, casting a ship carrying a net explosive weight of 1,625 tons adrift. Ir took six harrowing hours for two US Navy rugs, USS Tatnuck (ATA 195) and USS Koka (ATA 185), to recover the tow cable. She was towed to a newly determined disposal site and scurried; the cargo detonated at the planned 4,000 feet. The next four disposal operations also went as scheduled and included one intentional detonation . Most of the operations were carried our relatively smoothly, but weather, logistics of sinking large vessels and detonating old explosives could never be guaranteed to go exactly as planned.

Operation CHASE VI (SS Robert Louis Stevenson) The crew of the Stevenson prepared to scuttle the ship in the sam e manner as the previous Operation C HASE vessels. Prep-

arations were conducted at the Navy Ammunition Depot Bangor, Washington, and on 24 July 1967, the World War II Liberty ship Robert Louis Stevenson, loaded with 2,327 net tons of explosives, departed Bangor under tow for what would be her final mission. The navy directed the operational aspects of the project, providing the necessary on-site support, including air surveillance. US Coast Guard C utter Confidence (WMEC 619) provided surface surveillance at the test site. Tug Tatnuck accompanied and assisted the tow vessel; she also carried the scuttling crew and personnel responsible for making on-site measurements and recording the shock wave. On 10 August 1967, the Robert Louis Stevenson was scurried off Amchirka Island 1 1

Amchicka Island itself has an interesting history. In 1943 , the native population was removed to allow for the construction of a naval air base to be used as an advance location for the invasion of Japan. Between 1950 and 1961, it played a role as a station on the Defense Early Warning network to detect Soviet bombers and provide ea rly warn ing of a sea or land invas ion. In 1965, 1969 and 197 1, underground nuclear tests were conducted there. The 1965 test followed after a nearby earthq uake with the intention of generating data co differenti ate between narura l events and a nuclear explosion .