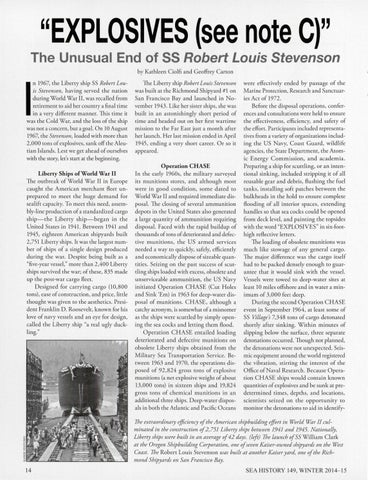 &quot;EXPLOSIVES (see note C)&quot; The Unusual End of SS Robert Louis Stevenson by Kathleen Ciolfi and Geoffrey Carton n 1967, the Liberty ship SS Robert Louis Stevenson, having served the nation during World War II, was recalled from retirement to aid her country a final time in a very different manner. This time it was the Cold War, and the loss of the ship was not a concern, but a goal. On 10 August 1967, the Stevenson, loaded with more than 2,000 tons of explosives, sank off the Aleutian Islands. Lest we get ahead of ourselves with the story, let&#39;s start at the beginning.

Liberty Ships of World War II The outbreak of World War II in Europe caught the American merchant fleet unprepared to meet the huge demand for sealift capacity. To meet this need, assembly-line production of a standardized cargo ship-the Liberty ship-began in the United States in 1941. Between 1941 and 1945, eighteen American shipyards built 2,751 Liberty ships. It was the largest number of ships of a single design produced during the war. Despite being built as a &quot;five-year vessel,&quot; more than 2,400 Liberty ships survived the war; of these, 835 made up the post-war cargo fleet. Designed for carrying cargo (10,800 tons), ease of construction, and price, little thought was given to the aest hetics. President Franklin D. Roosevelt, known fo r his love of navy vessels and an eye for design, called the Liberty ship &quot;a real ugly duckling.&quot;

The Liberty ship Robert Louis Stevenson was built at the Richmond Shipyard #1 on San Francisco Bay and launched in November 1943. Like her sister ships, she was built in an astonishingly short period of time and headed out on her first wartime mission to the Far East just a month after her launch. Her last mission ended in April 1945, ending a very short career. Or so it appeared .

Operation CHASE In the early 1960s, the military surveyed its munitions stores, and although most were in good condition, some dated to World War II and required immediate disposal. The closing of several ammu nition depots in the United States also generated a large quantity of ammunition requiring disposal. Faced with the rapid buildup of thousands of tons of deteriorated and defective munitions, the US armed services needed a way to quickly, safely, efficiently and economically dispose of sizeable quantities. Seizing on the past success of scuttling ships loaded with excess, obsolete and unserviceable ammunition, the US Navy initiated Operation CHASE (Cut Holes and Sink &#39;Em) in 1963 for deep-water disposal of munitions. CHASE, although a catchy acronym, is somewhat of a misnomer as the ships were scuttled by simply opening the sea cocks and letting them flood. Operation CHASE entailed loading deteriorated and defective munitions on obsolete Liberty ships obtained from the Military Sea Transportation Service. Between 1963 and 1970, the operations disposed of 92,824 gross tons of explosive munitions (a net explosive weight of about 13,000 tons) in sixteen ships and 19,824 gross tons of chemical munitions in an additional three ships. Deep-water disposals in both the Atlantic and Pacific Oceans

were effectively ended by passage of the Marine Protection, Research and Sanctuaries Act of 1972. Before the disposal operations, conferences and consultations were held to ensure the effectiveness, efficiency, and safety of the effort. Participants included representatives from a variety of organizations including the US Navy, Coast Guard, wildlife agencies, the State Department, the Atomic Energy Commission, and academia. Preparing a ship for scuttling, or an intentional sinking, included stripping it of all reusable gear and debris, flushing the fuel tanks, installing soft patches between the bulkheads in the hold to ensure complete flooding of all interior spaces, extending handles so that sea cocks could be opened from deck level, and painting the topsides with the word &quot;EXPLOSIVES&quot; in six-foothigh reflective letters. The loading of obsolete munitions was much like stowage of any general cargo. The major difference was the cargo itself had to be packed densely enough to guarantee that it would sink with the vessel. Vessels were towed to deep-water sites at least 10 miles offshore and in water a minimum of 3,000 feet deep. During the second Operation C H ASE event in September 1964 , at least some of SS Village&#39;s 7,348 tons of cargo detonated shortly after sinking. Within minutes of slipping below the surface, three separate detonations occurred. Though not planned, the detonations were not unexpected. Seismic equipment around the world registered the vibration, stirring the interest of the Office of Naval Research. Because Operation CHASE ships would contain known quantities of explosives and be sunk at predetermined times, depths, and locations, scientists seized on the opportunity to monitor the detonations to aid in identify-

The extraordinary efficiency ofthe American shipbuilding effort in World War II culminated in the construction of2,751 Liberty ships between 1941and1945. Nationally, Liberty ships were built in an average of42 days. (left) The launch ofSS William C lark at the Oregon Shipbuilding Corporation, one ofseven Kaiser-owned shipyards on the West Coast. The Robert Louis Stevenson was built at another Kaiser yard, one ofthe Richmond Shipyards on San Francisco Bay. 14