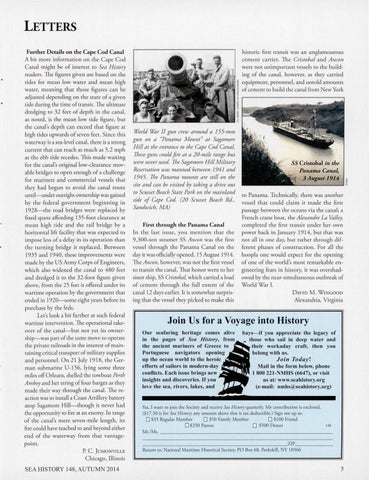 LETTERS Further D etails on the Cape Cod Canal A bir mo re info rmarion on rhe Cape Cod Canal might be of interesr to Sea H istory readers. The figures given are based on the tides fo r mean low warer and m ean high water, m ean ing rhar rhose fig ures can be adjusred depending on rhe srare of a given ride during the time of transit. The ulrimate dredging to 32 fee r of deprh in rhe canal, as nored, is rhe mean low ride figure, bur rhe canal&#39;s deprh can exceed rhar fig ure ar high rides upwards of seven fee t. Since rhis wa terway is a sea-level canal, rhere is a srrong current that can reach as much as 5.2 mph as rhe ebb tide recedes. This m ade waiting for rhe canal&#39;s original low-clearance movable bridges to open enough of a chal lenge for mariners and commercial vessels that they had begun to avoid the canal ro ute until-under outright ownership was gained by the federal government beginn ing in 1928-the road bridges were replaced by fixed spans affo rding 135-fo o r clearance at m ean high ride and the rail bridge by a horizo ntal lifr faciliry thar was expected to impose less of a delay in its operation than the tu rn ing bridge it replaced . Between 1935 and 1940, these improve ments were m ade by the US Army Corps of Engineers, which also widened rhe canal to 480 feet and d redged it to the 32-foot figure given above, fro m the 25 feer it offered under its wartime operation by the government that ended in 1920-some eight years before its purchase by the feds. Let&#39;s look a bit further at such federal warti me intervention. The operational takeover of rhe canal-but not ye t its ownership-was part of the same move ro operare the private railroads in the interest of maintaining critical transport of military supplies and personnel. On 2 1July 19 18, the Germ an submarine U-1 56, lying som e three miles off O rleans, shelled the towboat Perth Amboy and her string of four barges as they m ade rheir way thro ugh the canal. The reaction was to install a Coas t Ar tillery battery atop Sagamore Hill-though it never had the opportuni ry to fire at an enemy. In range of the canal&#39;s m ere seven-mile length, its fire could have reached to and beyond either end of the waterway from that vantagepoint. P. C. J UMONVILLE Chicago, Illinois

historic first transit was an unglam ourous cem ent carrier. The Cristobal and Ancon were not unimportant vessels to the building of the ca nal, however, as they carried equipment, perso nnel, and untold amounts of cement to build the canal fro m New York

World &quot;War 11 gun crew around a 155-mm gun on a &quot;Panama Mount&quot; at Sagamore H ill at the entrance to the Cape Cod Canal. These guns could fire at a 2 0-mile range but were never used. The Sagamore H ill Military Reservation was manned between 1941 and 1945. The Panama mounts are still on the site and can be visited by taking a drive out to Scusset Beach State Park on the mainland side of Cape Cod. (20 Scusset Beach Rd. , Sandwich, MA) First through the Panama Canal In the las t iss ue, yo u m entio n that the 9,300-ton steamer SS A ncon was the first vessel thro ugh the Pan am a Canal on the day it was officially opened, 15 August 1914. The Ancon, however, was no t the fi rs t vessel to transit the canal. That honor went to her sister ship, SS Cristobal which carried a load of cement thro ugh the full extent of the canal 12 days earlier. It is somewhar surprising that the vessel they picked to m ake this

......~~~~~~---&#39; ~ to Panam a. Technically, rhere was ano ther vessel tha t could claim it made the first passage between the oceans via the canal; a French crane boat, rhe Alexandre La Valley, completed th e firs t transit under her own power back in January 19 14, bu t that was not all in one day, but rather thro ugh different phases of construction. Fo r all the hoopla one wo uld expect for the opening of one of the world&#39;s most rem arkable engineering feats in history, it was overshadowed by the near-simultaneo us outbreak of Wo rld War I. D AVID

Join Us for a Voyage into History Our sea farin g heritage comes alive in the pages of Sea History , from the ancient mariners of Greece to Portuguese navigators opening up the ocea n world to the heroic efforts of sailors in modern-day conflicts. Each issue brings new insights and discoveries. If you love the sea, rivers, lakes, and