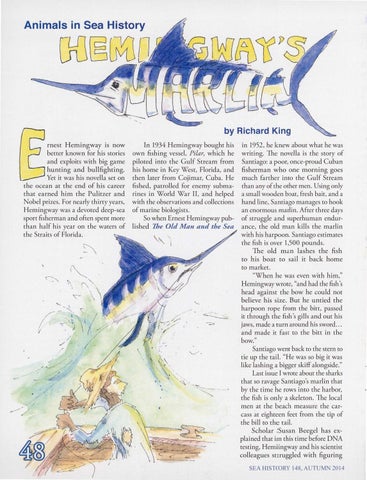 oo~~o by Richard King rnest Hemingway is now better known for his stories and exploits with big game hunting and bullfighting. Yet it was his novella set on the ocean at the end of his career that earned him the Pulitzer and Nobel prizes. For nearly thirty years, Hemingway was a devoted deep-sea sport fisherman and often spent more than half his year on the waters of the Straits of Florida.

In 1934 Hemingway bought his own fishing vessel, Pilar, which he piloted into the Gulf Stream from his home in Key West, Florida, and then later from Cojimar, Cuba. He fi shed, patrolled for enemy submarines in World War II, and helped with the observations and collections of marine biologists. So when Ernest Hemingway published The Old Man and the Sea

in 1952, he knew about what he was writing. The novella is the story of Santiago: a poor, once-proud Cuban fisherman who one morning goes much farther into the Gulf Stream than any of the other men. Using only a small wooden boat, fresh bait, and a hand line, Santiago manages to hook an enormous marlin. After three days of struggle and superhuman endurance, the old man kills the marlin with his harpoon. Santiago estimates the fish is over 1,500 pounds. The old m an lashes the fish to his boat to sail it back home to market. &quot;When he was even with him,&quot; Hemingway wrote, &quot;and had the fish &#39;s head against the bow he could not believe his size. But he untied the harpoon rope from the bitt, passed it through the fish &#39;s gills and out his jaws, made a turn around his sword ... and made it fast to the bitt in the bow.&quot; Santiago went back to the stern to tie up the tail. &quot;He was so big it was like lashing a bigger skiff alongside.&quot; Last issue I wrote about the sharks that so ravage Santiago&#39;s m arlin that by the time he rows into the harbor, the fish is only a skeleton. The local men at the beach measure the carcass at eighteen feet from the tip of the bill to the tail. Scholar :Susan Beegel has explained that im this time before DNA testing, Hemiingway and his scientist colleagues sttruggled with figuring SEA HISTCORY 148,AUTUMN 20 14