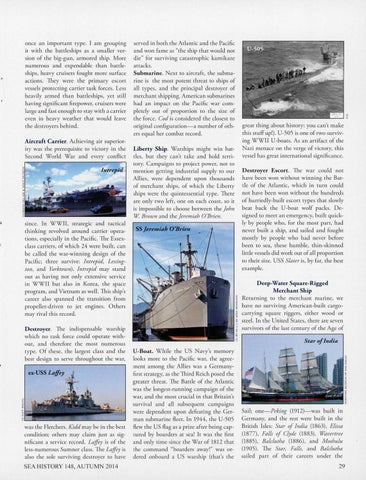 once an importa nt type. I a m grouping it with the battleships as a sm aller version of the big-gun, armored ship. More numerous and expendable than battleships, heavy cruisers fought more surface ac tions . They were the primary escort vessels protecting carrier task forces. Less heavily armed than battleships, yet still having significa nt firepower, cruisers were large and fast enough to stay with a carrier even in heavy wea ther that would leave the destroyers behind.

Aircraft Carrier. Achievin g air superiority was the prerequisite to victory in the Second World War and every conflict

since. In WWII, strategic and tactical thinking revolved around carrier operations, especi ally in the Pacific. The Essexclass carriers, of which 24 were bui lt, can be called the war-winning design of the Pacific; three survive: Intrepid, Lexington, and Yorktown) . Intrepid m ay stand out as having no t only extensive service in WWII but also in Korea, the space program, and Vietnam as well . This ship&#39;s career also spanned the transition from propeller-driven to jet engines. Others may rival this record.

Destroyer. The indispensable warship which no task force could operate without, and therefore the mos t numerous type. O f these, the larges t class and the bes t design to serve throughout the wa r,

was the Fletchers. Kidd m ay be in the best conditi on; others may claim just as significant a service record. Laffey is of the less-numerous Sumner class . The Laffey is also the sole surviving des troyer to have SEAHISTORY 148,AUTUMN 2014

served in both the Atl antic and the Pacific and wo n fa me as &quot;the ship that wo uld not die&quot; for surviving catas trophic kamikaze attacks. Submarine. Nex t to aircraft, the submarine is the most potent threat to ships of all types, and the principal destroyer of merchant shippin g. Am erican submarines had an impact on rhe Pacific wa r completely out of pro portion to the size of the fo rce. Cod is considered the closest to original configuration-a number of others equal her combat record .

Liberty Ship. Warships might win batdes, but they can&#39;t take and hold territory. Campaigns to project power, no t to mention getting industrial supply to our Allies, were dependent upon tho usands of merchant ships, of which rhe Liberty ships were the quintessenti al type. There are only two left, one on each coast, so it is impossible to choose between the john W Brown and the Jeremiah O &#39;Brien.

great thing about history: you can&#39;t make this stuff up!). U -505 is one of two surviving W W II U-boats. As an arti fac t of the Nazi m enace on the verge of victory, this vessel has great international significance.

Destroyer Escort. The war could not have been won without winning the Bard e of the Atlantic, which in turn could not h ave been won without the hundreds of hurriedly-built escort types that slowly beat back the U-boat wolf packs. Designed to meet an emergency, built quickly by people who, for the most part, had never built a ship, and sailed and fou ght m ostly by people who had never before been to sea, these humble, thin-skinned little vessels did wo rk out of all pro portion to their size. USS Slater is, by fa r, the best example. Deep-Water Square-Rigged Merchant Ship Returning to the merchant marine, we have no surviving Am erican-bui lt cargoca rrying square riggers, either wood or sreel. In the United States, there are seven survivors of the las t century of the Age of

Star ofIndia U-Boat. W hile the US Navy&#39;s memory looks more to the Pacific wa r, the agreement among the Allies was a G ermanyfirst strategy, as the Third Reich posed the greater threat. The Battle of the Ad antic was the longest-running campaign of the war, and the most crucial in that Britain&#39;s survival a nd all subsequent campaigns were dependent upon defeating the Germa n submarine fleet. In 1944, the U-50 5 flew the US fl ag as a prize after being capmred by boarders at sea! It was the first and only time since the Wa r of 1812 that the command &quot;boarders away!&quot; was ordered onboa rd a US warship (thar&#39;s rhe