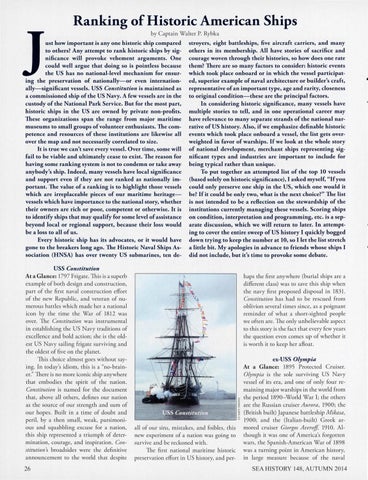 ust how important is any one historic ship compared to others? Any attempt to rank historic ships by significance will provoke vehement arguments. One could well argue that doing so is pointless because the US has no national-level mechanism for ensuring the preservation of nationally-or even internationally-significant vessels. USS Constitution is maintained as a commissioned ship of the US Navy. A few vessels are in the custody of the National Park Service. But for the most part, historic ships in the US are owned by private non-profits. These organizations span the range from major maritime museums to small groups of volunteer enthusiasts. The competence and resources of these institutions are likewise all over the map and not necessarily correlated to size. It is true we can&#39;t save every vessel. Over time, some will fail to be viable and ultimately cease to exist. The reason for having some ranking system is not to condemn or take away anybody&#39;s ship. Indeed, many vessels have local significance and support even if they are not ranked as nationally important. The value of a ranking is to highlight those vessels which are irreplaceable pieces of our maritime heritagevessels which have importance to the national story, whether their owners are rich or poor, competent or otherwise. It is to identify ships that may qualify for some level of assistance beyond local or regional support, because their loss would be a loss to all of us. Every historic ship has its advocates, or it would have gone to the breakers long ago. The Historic Naval Ships Association (HNSA) has over twenty US submarines, ten deUSS Constitution At a Glance: 1797 Frigate. This is a superb example of both design and construction, part of the first naval construction effort of the new Republic, and vetera n of numerous battles which made her a national icon by the time the War of 1812 was over. 1h e Constitution was instrumental in establishing the US Navy traditions of excellence and bold action; she is the oldest US Navy sailing frigate surviving and the oldest of five on the planet. This choice almost goes without saying. In today&#39;s idiom, this is a &quot;no-brainer.&quot; There is no more iconic ship anywhere that embodies the spirit of the nation . Constitution is named for the document that, above all others, defines our nation as the source of our strength and sum of our hopes. Built in a time of doubt and peril, by a then small, weak, parsimonious and squabbling excuse fo r a nation, this ship represented a triumph of determination, courage, and inspiration. Constitution&#39;s broadsides were the definitive announcement to the world that despite

stroyers, eight battleships, five aircraft carriers, and many others in its membership. All have stories of sacrifice and courage woven through their histories, so how does one rate them? There are so many factors to consider: historic events which took place onboard or in which the vessel participated, superior example of naval architecture or builder&#39;s craft, representative of an important type, age and rarity, closeness to original condition-these are the principal factors. In considering historic significance, many vessels have multiple stories to tell, and in one operational career may have relevance to many separate strands of the national narrative of US history. Also, if we emphasize definable historic events which took place onboard a vessel, the list gets overweighted in favor of warships. If we look at the whole story of national development, merchant ships representing significant types and industries are important to include for being typical rather than unique. To put together an attempted list of the top 10 vessels {based solely on historic significance), I asked myself, &quot;If you could only preserve one ship in the US, which one would it be? If it could be only two, what is the next choice?&quot; The list is not intended to be a reflection on the stewardship of the institutions currently managing these vessels. Scoring ships on condition, interpretation and programming, etc. is a separate discussion, which we will return to later. In attempting to cover the entire sweep of US history I quickly bogged down trying to keep the number at 10, so I let the list stretch a little bit. My apologies in advance to friends whose ships I did not include, but it&#39;s time to provoke some debate.

haps the first anywhere (burial ships are a different class) was to save this ship when the navy first proposed disposal in 1831. Constitution has h ad to be rescued from oblivion several times since, as a poignam reminder of what a short-sighted people we often are. The only unbelievable as pect to this story is the fac t that every few years the question even comes up of whether it is worth it to keep her aflo at.

all of o ur sins, mistakes, and fo ibles, this new experiment of a nation was going to survive and be reckoned wi th. The first national maritime historic preservation effort in US hi sto ry, a nd per-

ex-USS Olympia At a Glance: 1895 Protected C ruiser. Olympia is the sole survivi ng US Navy vessel of its era, and one of only four remaining major warships in the world from the period 1890-World War I; the others are the Russian cruiser Aurora, 1900; the (British built) Japanese bat tleship Mikasa, 1900; and the (Italian-b uilt) Greek armored cruiser Giorgos Averoff, 1910. A lthough it was one of America&#39;s forgotten wars, the Spanish-American War of 1898 was a turning point in American history, in large measure because of the naval