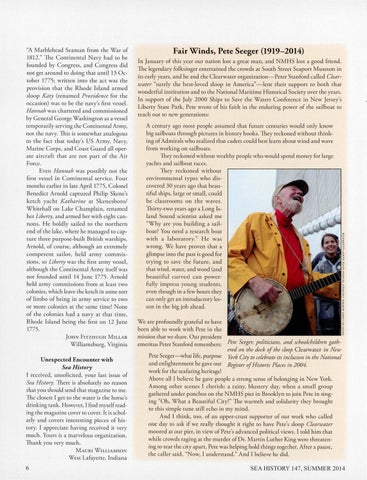 &quot;A Marblehead Seam an fro m the War of 1812.&quot; The Continental Navy had to be fo unded by Congress, and Cong ress did not get aro und to doing that until 13 October 1775; w ritten into the ac t was the provision that th e Rhode Island armed sloop Katy (ren am ed Providence fo r the occasion) was to be the navy&#39;s first vessel. H annah was chartered and commissioned by General George Was hington as a vessel temporari ly serving the Continental Army, no t the navy. This is somewhat analogous to the fact that today&#39;s US A rmy, Navy, M arine C orps, and Coast G uard all operate aircraft that are n ot part of the A ir Fo rce . Even H annah was possibly no t the first vessel in Continental serv ice. Fo ur months earlier in late April 1775, Colonel Benedict A rnold captured Philip Skene&#39;s ketch yacht Katharine a t Skenes boro/ W hitehall on Lake Ch amplain, renamed her Liberty, and armed her with eight ca nno ns. H e boldly sailed to the no rthern end of the lake, where he ma naged to capture th ree purpose-built British warships. A rnold, of course, although an extremely co mpetent sailor, held a rmy commissions, so Liberty was the fi rst army vessel, although the Continental A rmy itself was not fo unded until 14 June 1775. A rnold held a rmy commissions from at least two colonies, which leave the ketch in some sort of limbo of being in army service to two or m ore colonies at the same time! N one of the colonies had a n avy at that time, Rhode Island being the first on 12 June 1775. J o H N FITZH UGH M I LLAR

Sea History I received, unsolicited, your las t issue of Sea History. There is absolutely no reason that yo u should send that m agazine to me. The closest I get to the water is the horse&#39;s drin king tank. H owever, I find myself reading the magazine cover to cover. Ir is scholarly and covers inte resting pieces of h istory. I appreciate h aving received it very much . Yours is a ma rvelo us organization . Th ank yo u very much . M AUR I W ILLIAMSON

Fair Winds, Pete Seeger (1919-2014) In January of this yea r our nation lost a great man, and N MHS lost a good friend. The legendary fo lksinger entertained the crowds at South Street Seaport Museum in its early years, and he and the C learwater organi zation- Peter Stanford called Clearwater &quot;surely the bes t-loved sloop in A m erica&quot;-lent their support to both that wonderful institution and to the Na tional M aritime Historical Society over the years. In support of the July 2000 Ships to Save the Waters Conference in New Jersey&#39;s Liberty State Park, Pete wro te of his faith in the endurin g power of the sailboat to reach out to new generations: A century ago m ost people ass umed that future centuries would only know big sailboats through pictures in history books. They reckoned without thinking of Admirals who realized that cadets could bes t learn about wind and wave from working on sailboats. They reckoned without wealthy people who would spend money for large yachts and sailboat races. They reckoned w ithout environmental types who discovered 30 yea rs ago that beautiful ships, large or sm all, could be classroom s o n the waves . Thirty-two yea rs ago a Long Island Sound scientist asked m e &quot;Why are yo u building a sailboat? You need a research boat w ith a labo ratory.&quot; H e w as w ron g. W e h ave proven that a glimpse into the past is good for trying to save the future, a nd that wind, wa ter, and wood (and beautiful cur ves) can powerfully impress yo ung students, even though in a few hours they can only get an introductory lesson in the big job ahead . We are profo undly grateful to have been able to work with Pete in the mission that we share. Our president emeritus Peter Stanfo rd remembers:

Pete Seeger, politicians, and schoolchildren gathered on the deck of the sloop C learwater in New York City to celebrate its inclusion in the National Register ofH istoric Places in 2 004.

Pete Seeger-what li fe, purpose and enlightenment he gave our wo rk fo r the seafa ring heritage! Above all I believe he gave people a strong sense of belonging in New York. Among other scenes I cherish: a rainy, blustery day, when a sm all gro up gathered under ponchos on the NMHS pier in Brooklyn to join Pete in singing &quot;Oh, W hat a Beautiful C ity!&quot; The warmth and solidarity they brought to this simple tune still echo in my mind. And I think, too, of an upper-crust supporter of our work who called one day to ask if we really thought it right to have Pete&#39;s sloop Clearwater moored at our pier, in view of Pete&#39;s advanced political views. I told him that while crowds raging at the murder of Dr. Martin Luther King were threatening to tear the city apart, Pete was helping hold things together. After a pause, the caller said, &quot;Now, I understand.&quot; And I believe he did.