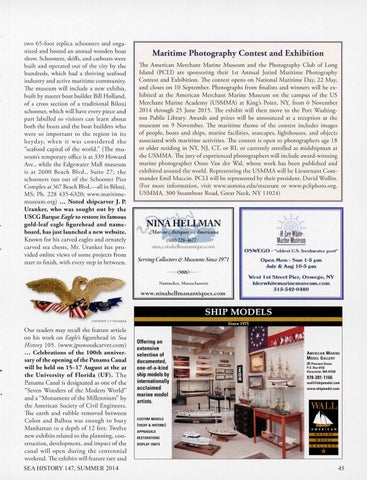 two 65-foor replica schooners and organized and hosted an annual wooden boar show. Schooners, skiffs, and catboats were built and operated o ur of the city by the hundreds, which h ad a thriving seafood industry and active m aritime community. The museum w ill include a new exhibit, built by maste r boar builder Bill Holland, of a cross section of a traditional Biloxi schooner, which will have every pi ece and part labell ed so visitors can learn about both the boars and the boar builders who were so impo rtant to the region in its h eyda y, wh e n it was co n sid e red t h e &quot;seafood capital of the world.&quot; (The museum&#39;s temporary office is at 339 Howard Ave. , while the Edgewater Mall museum is at 2600 Beach Blvd. , Suite 27; the schoon ers run our of the Schooner P ie r Complex at 367 Beach Blvd. -all in Biloxi, MS; Ph. 228 435-6320; www.maritimemuseum.org) ... Noted shipcarver J.P. Uranker, who was sought out by the USCG Barque Eagle to restore its famous gold-leaf eagle figurehead and nameboard, has just launched a new website. Known for his carved eagles and o rna tely carved sea chests, Mr. Ura nker has provided online views of som e proj ects fro m start to finish , with every step in betwee n .

Maritime Photography Contest and Exhibition The American Merchant Marine Museum and the Photography C lub of Long Island (PCLI) are sponso ring their 1st Annual Juri ed Maritime Photography C ontest and Exhibition. The co ntest opens on National Maritime D ay, 22 May, and closes on 10 September. Photographs from fin ali sts and winners will be exhibited at the American Merchant Marine Museum on the campus of the US Merchant Marine Academy (USMMA) at King&#39;s Point, NY, from 6 November 2014 through 25 June 2015. The exhibit will then move to the Port Washington Public Library. Awards and prizes will be an no unced at a reception at the museum on 9 November. The m aritime theme of the contest includes images of people, boars and ships, m arine facilities, seascapes, li ghtho uses, and obj ects associated with maritime activities. The contest is open to photographers age 18 or older residing in NY, NJ, CT, or RI, or currently enrolled as midshipman at the USMMA. The jury of experienced photographers will include award-winning marine photographer Onne Van der Wal, whose work has been published and exhibited around the world. Representing the USMMA will be Lieutenant Co mmander Emil Muccin . PCLI wi ll be represented by their president, David Wollin. (For more information, visit www.usmrna.edu/museum o r www.pcliphoto.org. USMMA, 300 Steamboat Road, Great Neck, NY 11024)

Our readers m ay recall the feature article on his work on Eagle&#39;s figurehead in Sea History 105. (www.jpuwoodcarver.com) ... Celebrations of the lOOth anniversary of the opening of the Panama Canal will be held on 15-17 August at the at the University of Florida (UF). T h e Panama Canal is designated as one of the &quot;Seven Wonders of the Modern World&quot; and a &quot;Monument of the Millennium&quot; by the American Society of Civil Engineers. The earth and rubble removed between Colon and Balboa was enough to bury Manhattan to a depth of 12 feet. Twelve new exhibits related to the planning, construction, development, and impact of the canal will open during the centennial weekend. The exhibits will feature rare and SEA HISTORY 147, SUMMER 2014