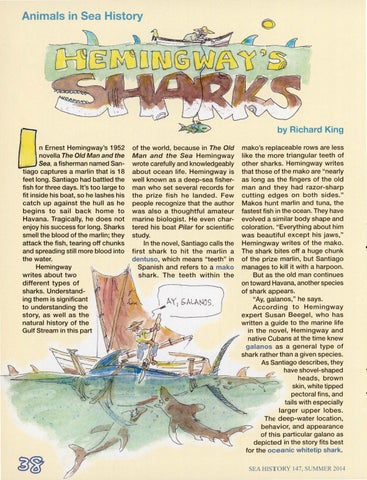 by Richard King n Ernest Hemingway&#39;s 1952 novella The Old Man and the Sea, a fisherman named Santiago captures a marlin that is 18 feet long. Santiago had battled the fish for three days. It&#39;s too large to fit inside his boat, so he lashes his catch up against the hull as he begins to sail back home to Havana. Tragically, he does not enjoy his success for long. Sharks smell the blood of the marlin; they attack the fish, tearing off chunks and spreading still more blood into the water. Hemingway writes about two different types of sharks. Understanding them is significant to understanding the

of the world, because in The Old Man and the Sea Hemingway wrote carefully and knowledgeably about ocean life. Hemingway is well known as a deep-sea fisherman who set several records for the prize fish he landed. Few people recognize that the author was also a thoughtful amateur marine biologist. He even chartered his boat Pilar for scientific study. In the novel, Santiago calls the first shark to hit the marlin a

mako&#39;s replaceable rows are less like the more triangular teeth of other sharks. Hemingway writes that those of the mako are &quot;nearly as long as the fingers of the old man and they had razor-sharp cutting edges on both sides.&quot; Makos hunt marlin and tuna, the fastest fish in the ocean. They have evolved a similar body shape and coloration. &quot;Everything about him was beautiful except his jaws,&quot; Hemingway writes of the mako. The shark bites off a huge chunk of the prize marlin, but Santiago manages to kill it with a harpoon. But as the old man continues on toward Havana, another species of shark appears. &quot;Ay, galanos,&quot; he says. According to Hemingway expert Susan Beegel, who has written a guide to the marine life in the novel, Hemingway and native Cubans at the time knew