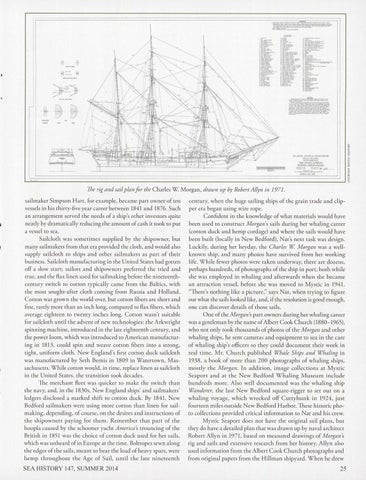 1he rig and sail plan for the Charles W Morgan, drawn up by Robert Allyn in 197 1. sailmaker Simpson Hart, for example, became part owner of ten vessels in his thirty-fi ve year career between 1841 and 1876. Such an arrangement served the needs of a ship&#39;s mher investo rs quite neatly by dramatically reducing the amount of cash it took to put a vessel to sea. Sailcloth was sometimes supplied by the shipow ner, bur many sailmakers from char era provided the cloth, and would also supply sailcloth to ships and other sail makers as part of their business. Sailcloth manufacturing in the United States had gotten off a slow start; sailors and shipowners preferred rhe tried and true, and the flax linen used for sailmaking before the nineteenthcentury switch to cotton typically came from the Balrics, with the most sought-after cloth coming from Russia and Holland. Cotton was grown the world over, bur cotton fibers are short and fine, rarely more than an inch long, compared to flax fibers, which average eighteen to twenty inches long. Cotto n wasn&#39;t suitable for sailcloth until the advent of new technologies: the Arkwright spinning machine, introduced in the late eighteenth century, and the power loom, which was introduced to American manufacturing in 1813, could spin and weave cotton fibers into a strong, tight, uniform cloth. New England&#39;s first cotton duck sailcloth was manufactured by Seth Bemis in 1809 in Watertown, Massachusetts. While cotton would, in time, replace linen as sailcloth in the United States, the transition rook decades. The merchant fleet was quicker to make the switch than the navy, and, in the 1830s, New England ships&#39; and sailmakers&#39; ledgers disclosed a marked shift to cotton duck. By 184 1, New Bedford sailmakers were using more cotton than linen for sailmaking, depending, of course, on the desires and instructions of the shipowners paying for them. Remember that part of the hoopla caused by the schooner yacht America&#39;s trouncing of the British in 1851 was the choice of cotton duck used for her sails, which was unheard of in Europe at the rime. Boltropes sewn along the edges of the sails, meant to bear the load of heavy spars, were hemp throughout the Age of Sail, until the late nineteenth SEA HISTORY 147, SUMMER 2014

century, when the huge sa iling ships of the grain trade and clipper era began using wire rope. Confident in the knowledge of what materials would have been used to construct Morgan&#39;s sails during her whaling career (cotton duck and hemp cordage) and where the sails would have been built (locally in New Bedford), Nat&#39;s next task was design. Luckily, during her heyday, the Charles W Morgan was a wellknown ship, and many photos have survived from her working life. While fewer photos were taken underway, there are dozens, perhaps hundreds, of photographs of the ship in port, both while she was employed in whaling and afterwards when she became an attraction vessel, before she was moved to M ys tic in 1941. &quot;There&#39;s nothing like a picture,&quot; says Nat, when trying to figure our what the sails looked like, and, if the resolution is good enough, one can discover details of those sails. One of the Morgan&#39;s part owners during her whaling career was a gentleman by the name ofAlbert Cook Church (1880-1965), who not only rook thousands of photos of the Morgan and other whaling ships, he sent cameras and equipment to sea in the care of whaling ship&#39;s officers so they could document their work in real time. Mr. Church published Whale Ships and Whaling in 1938 , a book of more than 200 photographs of whaling ships, mostly the Morgan. In addition, image collections at Mystic Seaport and at the New Bedford Whaling Museum include hundreds more. Also well documented was the whaling ship Wanderer, the las t New Bedford square-rigger to set out on a whaling voyage, which wrecked off Cuttyhunk in 1924, just fourteen miles outside New Bedford Harbor. These historic photo collections provided critical information to Nat and his crew. Mystic Seaport does not have the original sail plans, but they do have a deta iled plan that was drawn up by naval architect Robert Allyn in 1971, based on measured drawings of Morgan &#39;s rig and sails and extensive research from her history. Allyn also used information from the Albert Cook Church photograph s and from original papers from the Hillman shipya rd. When he drew 25