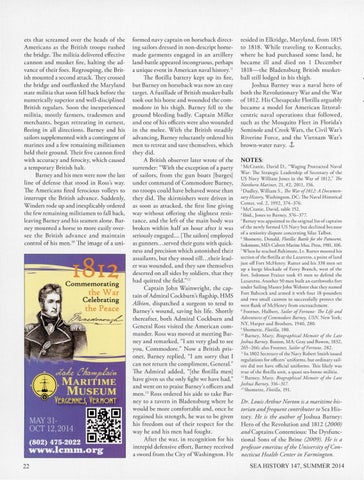 ecs chat screa med over the heads of the Americans as the British troops rushed the bridge. The mi litia delivered effective cannon and musket fire, haltin g the advance of their foes. Regrouping, the British mounted a second attack. They crossed the bridge and outflanked the Maryland state militia chat soon fell back before the numerically superior and wel l-disciplined British regulars. Soon the inexperienced militia, moscly farmers, tradesmen and merchants, began recreating in earnest, Aeeing in all directions. Barney and his sa ilors supplemented w ith a contingent of marines and a few remaining militiam en held their gro und. Their fi ve cannon fired with acc uracy and ferocity, which caused a temporary British halt. Barney and his men were now the lase li ne of defense chat stood in Ross's way. The America ns fired ferocious volleys co interrupt the British advance. Sudd enly, Winders rode up and inexplicably ordered the few remaining militiamen co fall back, leavin g Barney and his sea men alone. Barney mounted a horse to more easi ly oversee the British advance and m ai ntai n control of his men. 10 The image of a uni-

formed navy captain on horseback direcci ng sa ilors dressed in non-descript homemade garments en gaged in an a rtiller y land-battle appeared incongruous, perhaps a unique event in American naval hiscory. 11 The flotilla battery kept up its fire, but Barney on horseback was now an easy target. A fusi llade of British musket-balls cook out his horse and wo unded the commodore in his t high. Barney fe ll co the gro und bleedin g badly. Captain Mi ller and one of hi s officers were also wo unded in the melee. With the British steadily advancing, Barney reluctantly ordered his men co retreat and save themselves, which they did. A British observer later wrote of the surrender: "With the exceptio n of a party of sailors, from the g un boats [barges] under command of Commodore Barney, no troops could h ave behaved worse than they did. The skirmishers were driven in as soon as attacked, the first li ne giv ing way w ithout offering the slightest resistance, and the left of the main body was broken within half an hour after it was seriously engaged .... [The sailors] employed as gunners . .. served their guns with qui ckness a nd precision which asto nished their assaila nts, but they stood till. .. their leader was wo unded, and they saw themselves deserted on all sides by soldiers, chat they had q uitted t he fie ld." 12 Captain John Wainwright, the captain of Admira l Cockburn's flagship, HMS Albion, dispatched a surgeon co tend to Barney's wound, saving his life. Shortly thereafter, both Admiral Cockburn and General Ross visited the American commander. Ross was moved at meeting Barney and remarked, "I am very glad to see you, Commodore." Now a British prisoner, Barney replied, "I am sorry chat I can not return the co mpliment, General." The Adm ira l added, "[the flotilla m en] have given us the o nly fig ht we h ave h ad," and went on co praise Barney's officers and men. 13 Ross ordered hi s aide co cake Barney co a cavern in Bladensburg where he wo uld be more comfortable and , once he regained his strength, he was to be given his freedom out of their respect for the way he and his men had fought. After the war, in recognition for his intrepid defens ive effort, Barney received a sword from the C ity of Washington. He

Dr. Louis Arthur Norton is a maritime historian andfrequent contributor to Sea History. H e is the author of Joshua Barney: Hero of the Revolution and 1812 (2000) and Captains Content ious: The Dysfunctiona l Sons of the Brine (2009). He is a professor emeritus ofthe University of Connecticut Health Center in Farmington.