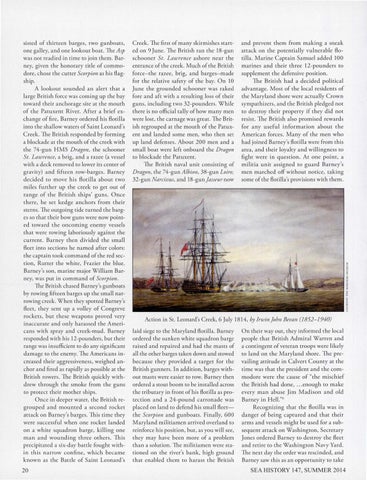 sisted of thirteen barges, two gu nboats, one galley, and one lookout boat. The Asp was not readied in time to join them. Barney, given the honorary tide of commodore, chose the cutter Scorpion as hi s flagship. A lookout sounded an alert that a large British force was coming up the bay toward their anchorage site at the mouth of the Patuxent River. After a brief exchange of fire, Barney ordered his flotilla into the shallow waters of Saim Leonard&#39;s Creek. The British responded by form ing a blockade at the mouth of the creek with the 74-gun HMS Dragon, the schooner St. Lawrence, a brig, and a razee (a vessel with a deck removed to lower its cemer of gravity) and fifteen row-barges. Barney decided to move his flotilla about two miles further up the creek to get out of range of the British ships&#39; guns. Once there, he set kedge a nchors from their sterns. TI1e outgoi ng tide turned the barges so that their bow gu ns were now pointed toward the oncoming enemy vessels that were rowing laboriously against the current. Barney then divided the small fleet into sections he named after colors: the captain took comm and of the red section, Rutter the white, Frazier the blue. Barney&#39;s son, marine major William Barney, was put in command of Scorpion. The British chased Barney&#39;s gunboats by rowing fifteen barges up the sm all narrowing creek. When they spotted Barney&#39;s fleet, they sent up a volley of Congreve rockets, but these weapons proved very inaccurate and only h arassed the Americans with spray and creek-mud. Barney responded with his 12-pounders, but their range was insufficiem to do any significant damage to the enemy. The Americans increased their aggressive ness, weighed anchor and fired as rapidly as possible at the British rowers. The British quickly withdrew through the smoke from the guns to protect their mother ships. Once in deeper water, the British regrouped and mounted a second rocket attack on Barney&#39;s barges. This time they were successful when o ne rocket landed on a white squadron barge, killing one man and wounding three others. This precipitated a six-day battle fought within this narrow confine, which became known as the Battle of Sa int Leonard&#39;s 20

C reek. The first of many skirmishes started on 9 June. TI1e British ran the 18-gun schooner St. Lawrence ashore near the emrance of the creek. Much of the British force-the razee, brig, and barges-made for the relative safety of the bay. On 10 June the grounded schooner was raked fore and aft with a resulting loss of their guns, including two 32-pounders. While there is no official tally of how many men were lost, the carnage was great. The British regrouped at the mouth of the Patuxent and landed some men, who then set up land defenses. About 200 men and a sm all boat were lefr onboard the Dragon to blockade the Pamxent. The British naval unit consistin g of Dragon, the 74-gun Albion, 38-gun Loire, 32-gun Narcissus, and 18-gunjasseur now

and prevent them from making a sneak attack on the potentially vulnerable floti lla. Marine Captain Samuel added 100 marines and their three 12-pounders to supplement the defensive position. The British had a decided political advantage . Most of the local residents of the Maryland shore were actually Crown sympathizers, and the British pledged not to destroy their property if they did not resist. The British also promised rewards for any useful information about the American forces. Many of the men who had joined Barney&#39;s flotilla were from this area, a nd their loyalty and willingness to fight were in question. At one point, a militia unit assigned to g uard Barney&#39;s men marched off without notice, taking some of the flotill a&#39;s provisions with them.

Action in St. Leonard&#39;s C reek, 6 July 1814, by Irwin john Bevan (1852-1940) laid siege to the Maryland flotilla. Barney ordered the sunken white sq uadron barge raised and repaired and h ad the masts of all the other barges taken down and stowed because they provided a target for the British gunners. In addition, barges without masts were easier to row. Barney then ordered a stout boom to be installed across the tributary in front of his flotilla as protection and a 24-pound carronade was placed on land to defend his small fleetthe Scorpion and gunboats. Finally, 600 Maryland militiamen arrived overland to reinforce his position, but, as you will see, they may have been more of a problem than a solution. The militiamen were stationed on the river&#39;s bank, high grou nd that enabled them to harass the British

On their way out, they informed the local people that British Admiral Warren and a comingent of veteran troops were likely to land on the Maryland shore. The prevailing attitude in Calvert County at the time was that the president and the commodore were the cause of &quot;th e mischief the British had done, ... enough to make every man abuse Jim Madison and old Barney in Hell.&quot;6 Recognizing that the flotilla was in danger of being captured and that their arms and vessels might be used for a subsequent attack on Washington, Secretary Jones ordered Barney to destroy the fleet and retire to the Washington Navy Yard. The next day the order was rescinded, and Barney saw this as an opportunity to take SEA HISTORY 147, SUMMER 2014