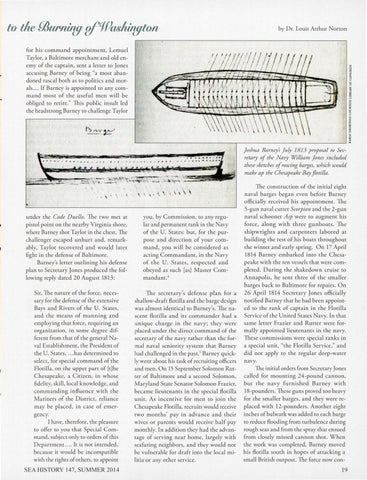 for his comma nd appointment, Lemuel Taylor, a Baltimore m ercha nt and old enemy of the captain, sent a letter to Jones accusing Ba rney of being &quot;a most abandoned rascal both as to politics and m orals ... . If Barney is appointed to a ny comm and m ost of rhe useful m en w ill be obliged to retire.&quot; This public in sult led the headsrron g Barney to challenge Taylor

Joshua Barney&#39;s July 18 13 p roposal to Secretary of the Navy Wilfiam Jo nes included these sketches of rowing barges, which would make up the Chesapeake Bay flotilla.

Sir, The nature of the fo rce, necessary fo r the defense of the extensive Bays and Rivers of the U. Stares, and rhe m ea ns of m a nning a nd employ ing that fo rce, requi ring an organizatio n, in som e degree different fro m that of rhe general Naval Establishment, the President of the U. States, .. . has determined to select, fo r special comm a nd of the Flotilla, on the upper pa rt of [t]he C hesapea ke, a C itizen, in whose fideli ty, skill, local knowledge, and comm a nding influence with the M ariners of the District, reliance m ay be placed , in case of em ergency. I have, therefore, the pleasure to offer to yo u rhar Special Command, subject only to orders of this D epart ment. ... It is not intended , because it wo uld be incompatible with the rights of others, to appoint

The construction of the initi al eight naval ba rges bega n even before Barney offi cially received his appointment. The 5-gun nava l cutter Scorpion and the 2-gun naval schoo ner Asp were to augm ent his fo rce, along with three gunboa ts. The shipw rights a nd ca rpenters la bored at building the res t of his boats througho ut rhe winter and earl y spring. O n 17 April 18 14 Barney emba rked into the C hesapeake with rhe ten vessels that we re com pleted . During the sha kedown cruise to A nnap olis, he sent three of the sm aller ba rges back to Baltimo re for repa irs . O n 26 April 1814 Secreta ry Jones offi cially notified Barney that he had been appointed to the rank of captain in the Flotilla Service of the U nited Scares Navy. In that sam e letter Frazier a nd Rutter were fo rm ally appointed lieuten ants in rhe navy. These commissions were special ranks in a special unit, &quot;the Flotilla Service,&quot; a nd did not apply to the regul a r deep-water navy. The initial orders fro m Secretary Jones called fo r mounting 24-po und ca nnon , but the n avy furni shed Ba rney w ith 18-pounders. These guns proved too heavy fo r the sm aller barges, and they were replaced with 12-pounders. A no ther eight inches of bulwa rk was added to each barge to reduce flooding from rnrbul ence during ro ugh seas and from the spray that ensued fro m closely missed canno n sho t. W hen t he work was completed, Barney m oved his flotilla south in hopes of attackin g a sm all British outpost. The force now con-