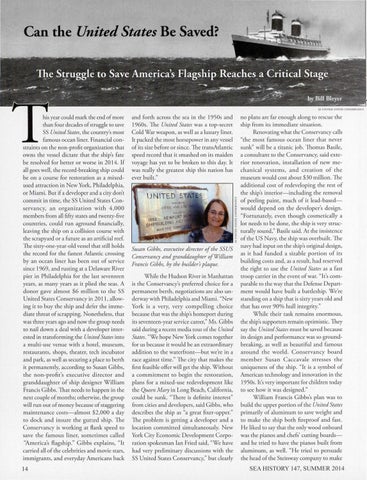 Can the United States Be Saved?

his year could mark rhe end of more rhan four decades of srruggle ro save SS United States, rhe country's mosr famou s ocean liner. Financial consrraints on rhe no n-profit organization thar owns rhe vessel dicrate that rhe ship's fate be resolved for better or worse in 2014 . If all goes well, the record-breakin g ship could be on a course for restoration as a mixedused am action in New York, Philadelphia, or Miami. But if a developer and a city don't co mmit in time, the SS United Stares Conse rvan cy, an organizatio n with 4, 000 members from all fifty states and twenty-five countries, co uld run aground finan cially, leaving the ship on a collision course with rhe scrapyard or a fu cure as an artificial reef. Th e sixty-o ne-year-old vessel that still holds the reco rd fo r the fas test Atlantic crossing by an ocean liner has been out of service since 1969, and rusring ar a Delaware River pier in Philadelphia for rhe las r seventeen years, as m any years as ir plied rhe seas. A don o r gave almosr $6 million to rhe SS U nited States Conservancy in 2011 , allowing it to buy the ship and defer the immediate threat of scrapping. Nonetheless, that was three years ago and now the group needs to nail down a deal with a developer interested in transforming the United States inro a mulri-use venue wirh a horel, museum, restaurants, shops, rhearer, rech incubaror and park, as well as securing a place ro berth ir permanently, according to Susan Gibbs, the n o n-profit's executive director and granddaughrer of ship designer William Francis G ibbs. Thar needs to happen in rhe nexr couple of months; orherwise, rhe group will run out of money because of staggering maintenance costs-almost $2,000 a day to dock and insure the gur red ship . The Co nse rvancy is working at Rank speed to save the fa mous liner, sometim es called "Am erica's flagship." Gibbs explains, "Ir carried all of the celebrities and movie stars, immigrants, and everyday Americans back 14

and fo rth across the sea in the 195 0s and 1960s. The United States was a top-secret C old War weapon, as well as a luxury liner. Ir packed the most horsepower in any vessel of its size before or since. The transAtlantic speed record that it smashed on its maiden voyage has ye t to be broken ro this day. It was really the greatest ship this nation has ever built."

Susan Gibbs, executive director of the SSUS Conservancy and granddaughter of William Francis Gibbs, by the builder's plaque.

While rhe Hudson River in M anhan an is the Conservancy's preferred choice fo r a permanent berth, nego riarions are also underway with Philadelphia and Miami. "New York is a very, very compelling ch oice because that was the ship's homeport during its seventeen-year service career," Ms. Gibbs said during a recent media ro ur of the United States. "We hope New Yo rk comes rogether for us because it wo uld be an exrrao rdinary addirion to rhe waterfront- but we're in a race against time." 1he city rhar makes the firsr feasible offer will get rhe ship. Without a commitment to begin the restoration, plans for a mixed-use redevelopment like the Queen M ary in Long Beach, California, could be sunk. "There is definite interest" from cities and developers, said Gibbs, who describes the ship as "a grear fixer-upper." The problem is gerring a developer and a location committed simultaneously. New York C ity Eco nomic D evelopment Corporation spokesman Ian Fried said, "We have had very preliminary discussions with the SS United States Conservancy," but clearly

no plans are far enough alo ng to rescue rhe ship from irs immediare siruario n. Renova ring whar the Conservancy calls "rhe m os r fa m o us ocean liner that never sunk" will be a titanic job. Thomas Basile, a consultant to the Conservancy, said exterior renovatio n , installation of new m ech ani cal sys rem s, and creation o f th e museum wo uld cost about $30 million. The additi onal cost of redevelopi ng the res t of the ship's interi or- including the rem oval of peeling paint, much of it lead-basedwould depend o n the developer's des ign . "Fortunarely, even though cosmetically a lot needs ro be done, rhe ship is very srrucrurally sound," Basile said. At the insistence of rhe US Navy, the ship was overbuilt. The navy had input on the ship's original des ign, as ir had funded a sizable portion of its building costs and, as a result, had reserved the right to use the United States as a fas t troop carrier in the event of war. "Ir's comparable ro the way char the D efense D epartm ent wo uld have built a battleship. W e're standing on a ship that is sixty years old and that has over 90% hull integrity." W hile their task remains enormous, the ship's supporters remain optimistic. They say the United States must be saved because its design and performance was so groundbreaking, as well as beautiful and fam ous aro und the wo rld. Con servan cy board m embe r Susan Caccavale stresses the uniqueness of the ship. "It is a symbol of American technology and innovation in the 1950s. Ir's very important for children today to see how it was designed." William Francis Gibbs's plan was to build the upper portion of the United States primarily of aluminum to save weight and to make the ship both fireproof and fas t. H e liked to say that the only wood on board was the pianos and chefs' cutting boardsand he tried to have the pianos built from aluminum, as well. "H e tried to persuade the head of the Steinway company to make