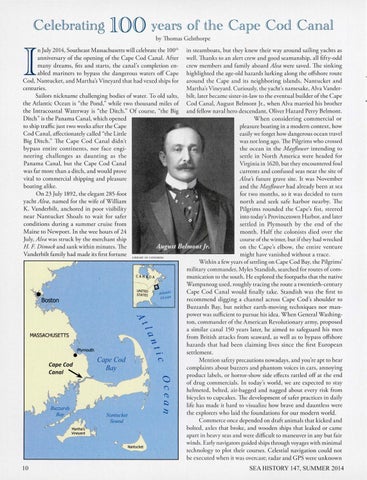 00 yearยง of the Cape Cod CanaR by Thomas Gelsthorpe

n July 2014, Southeast Massachusetts will celebrate the lOO&#39;h anniversary of the opening of the Cape Cod Canal. After many dreams, fits and starts, the canal&#39;s completion enabled mariners to bypass the dangerous waters off Cape Cod, Nantucket, and Martha&#39;s Vineyard that had vexed ships for centuries. Sailors nickname challenging bodies of water. To old salts, the Atlantic Ocean is &quot;the Pond,&quot; while two thousand miles of the Intracoastal Waterway is &quot;the Ditch.&quot; Of course, &quot;the Big Ditch&quot; is the Panama Canal, which opened to ship traffic just two weeks after the Cape Cod Canal, affectionately called &quot;the Little Big Ditch.&quot; The Cape Cod Canal didn&#39;t bypass entire continents, nor face engineering challenges as daunting as the Panama Canal, but the Cape Cod Canal was far more than a ditch, and would prove vital to commercial shipping and pleasure boating alike. On 23 July 1892, the elegant 285-foot yacht A lva, named for the wife of William K. Vanderbilt, anchored in poor visibility near Nantucket Shoals to wait for safer conditions during a summer cruise from Maine to Newport. In the wee hours of24 July, Alva was struck by the merchant ship H. F Dimock and sank within minutes. The Vanderbilt family had made its first fortune LIB RARY OF CONGRESS

in steamboats, but they knew thei r way around sailing yachts as well. Thanks to an alert crew a nd good sea manship, all fifty-odd crew members and family aboard A lva were saved. The sinking highlighted the age-old hazards lurking along the offshore route aro und the Cape and its neighboring islands, Nantucket and Martha&#39;s Vineyard. C uriously, the yac ht&#39;s namesake, Alva Vanderbilt, later beca me sister-in-law to the eventual builder of the Cape Cod Ca nal, August Belmont Jr., when Alva married his brother and fellow naval hero descenda nt, Oliver Hazard Perry Belmont. When co nsidering commercial or pleasure boating in a modern context, how easily we forget how dangerous ocean travel was not long ago. The Pilgrims who crossed the ocean in the Mayflower intending to se ttle in North America were headed for Virginia in 1620, but they encountered foul currents and confused seas near the site of Alva&#39;s future grave site. It was November and the Mayflower had already been at sea for two months, so it was decided to turn north a nd seek safe harbor nearby. The Pilgrims rounded the Cape&#39;s fist, steered into today&#39;s Provincetown Harbor, and later settled in Plymouth by the end of the month. Half the colonists died over the course of the wimer, but if they had wrecked on the Cape&#39;s elbow, the entire venture might have vanished without a trace. Within a few yea rs of settling on Cape Cod Bay, the Pilgrims&#39; military commander, Myles Standish, searched for routes of communication to the south. H e explored the footpaths that the native Wampanoag used , roughly tracing the route a twentieth-century Cape Cod Canal would finally take. Standish was the first to recommend digging a channel across Cape Cod&#39;s shoulder to Buzza rds Bay, but neither ea rth-moving techniques nor manpower was sufficient to pursue his idea. When General Washington, commander of the American Revolutionary army, proposed a similar canal 150 years later, he aimed to safeguard his m en from British attacks from seaward, as well as to bypass offshore hazards that had been claiming lives since the first European settlement. Mention safety precautions nowadays, and you&#39;re apt to hear complaints about buzzers and phantom voices in cars, annoying product labels, or horror-show side effects rattled off at the end of drug commercials. In today&#39;s world, we are expected to stay helmeted, belted, air-bagged and nagged about every risk from bicycles to cupcakes. The development of safer practices in daily life has made it hard to visualize how brave and dauntless were the explorers who laid the foundations for our modern world. Commerce once depended on draft animals that kicked and bolted , axles that broke, and wooden ships that leaked or came apart in heavy seas and were difficult to maneuver in any but fair winds. Early navigators guided ships through voyages with minimal technology to plot their courses. Celestial navigation could not be executed when it was overcast; radar and GPS were unknown