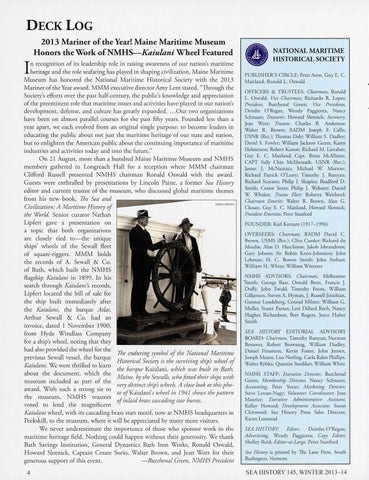 n recognition of its leadership role in raising awareness of our nation's maritime heritage and the role seafaring has played in shaping civilization, Maine Maritime Museum has honored the National Maritime Historical Society with the 2013 Mariner of the Year award. MMM executive director Amy Lent stated, "Through the Society's efforts over the past half-century, the public's knowledge and appreciation of the preeminent role that maritime issues and activities have played in our nation's development, defense, and culture has greatly expanded . ... Our two organizations have been on almost parallel courses for the past fifty years. Founded less than a year apart, we each evolved from an original single purpose: to become leaders in educating the public about not just the maritime heritage of our state and nation, but to enlighten the American public about the continuing importance of maritime industries and activities today and into the future ." On 21 August, more than a hundred Maine Maritime Museum and NMHS members gathered in Longreach Hall for a reception where MMM chairman Clifford Russell presented NMHS chairman Ronald Oswald with the award. Guests were enthralled by presentations by Lincoln Paine, a former Sea History editor and current trustee of the museum, who discussed global maritime themes from his new book, The Sea and N MHS PHOT O Civilization: A M aritime History of the World. Senior curator Nathan Lipfert gave a presentation on a topic that both organizations are closely tied to-the unique ships' wheels of the Sewall fleet of square-riggers. MMM holds the records of A. Sewall & Co. of Bath, which built the NMHS flagship Kaiulani in 1899. In his search through Kaiulani's records, Lipfert located the bill of sale for the ship built immediately after the Kaiulani, the barque Atlas. Arthur Sewall & Co. had an invoice, dated 1 November 1900, from Hyde Windlass Company for a ship's wheel, noting that they had also provided the wheel for the The enduring symbol of the National Maritime previous Sewall vessel, the barque Historical Society is the surviving ship's wheel of Kaiulani. We were thrilled to learn the barque Kaiulani, which was built in Bath, about the document, which the Maine, by the Sewal/s, who fitted their ships with museum included as part of the very distinct ship's wheels. A close look at this phoaward. With such a strong tie to to ofKaiulani's wheel in 194 1 shows the pattern the museum, NMHS trustees of inlaid brass cascading star bursts. voted to lend the magnificent Kaiulani wheel, with its cascading brass stars motif, now at NMHS headquarters in Peekskill, to the museum, where it will be appreciated by many more visitors. We never underestimate the importance of those who sponsor work in the maritime heritage field. Nothing could happen without their generosity. We thank Bath Savings Institution , General Dynamics Bath Iron Works, Ronald Oswald, Howard Slotnick, Captain Cesare Sorio, Walter Brown, and Jean Wort for their generous support of this event. -Burchenal Green, NMHS President 4