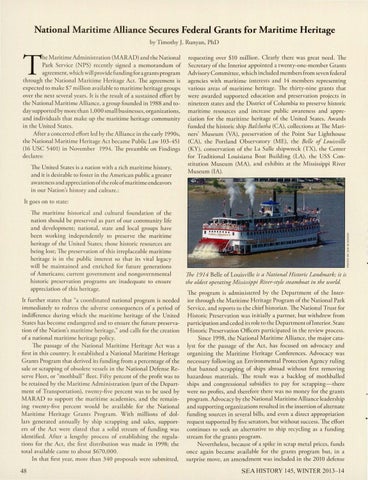 he MaririmeAdminisrrarion (MARAD) and rhe Narional Park Service (NPS) recently signed a memorandum of agreement, which will provide funding fora grants program rhrough rhe Narional Maririme Heritage Acr. The agreement is expecred ro make $7 million available w maririme herirage groups over rhe nexr several years. Ir is rhe result of a sustained effort by rhe Narional Maririme Alliance, a group founded in 1988 and roday supported by more rhan 1,000 small businesses, organizarions, and individuals that make up the maritime heritage community in the Un ired States. Afrer a concerted effort led by the A lliance in the early 1990s, rhe Natio nal Maririme Heritage Act became Public Law 103-45 1 (16 USC 5401) in November 1994. The preamble on Findings declares: The United States is a nation wirh a rich maritime history, and it is desirable w fosrer in rhe American public a grearer awareness and appreciation of the role of maritime endeavors in our Nation&#39;s hisrory and culture.:

Ir goes on w state: The ma ritime hisrorical and cultura l foundarion of rhe nation should be preserved as part of our communiry life and development; national, stare and local groups have been working independently w preserve the maritime heritage of the Unired Stares; rhose hisroric resources are being losr; The preservarion of rhis irreplaceable maritime heritage is in the public imeresr so that its vital legacy wi ll be maintained and enriched for fuwre generarions of Americans; current government and nongovernmemal hisroric preservarion programs are inadequare to ensure app reciation of rhis heritage.

Ir furrher srates that &quot;a coordinared narional program is needed immedi ately to redress rhe adverse consequences of a period of indifference during which rhe maritime herirage of rhe United Stares has become endangered and w ensure the fuwre preservarion of the Nation&#39;s maritime heritage,&quot; and calls for the creation of a national maritime heritage policy. The passage of the National Maritime Heritage Act was a first in this country. It established a National Maritime H eritage Grants Program that derived its funding from a percentage of the sale or scrapping of obsolete vessels in the National D efense Reserve Fleer, or &quot;mothball&quot; fleer. Fifty percent of rhe profit was w be retained by rhe Maritime Administration (part of rhe Department of Transportation), twenty-five percent was w be used by MARAD w support the maritime academies, and rhe remaining twenty-five percent would be avai lable for the National Marit ime Heritage Grants Program. With millions of dollars generated annually by ship scrapping and sales, supporters of the Act were elated rhar a solid stream of funding was identified . After a lengthy process of es tablish ing the regularions for the Act, the first distribution was made in 1998; the rota! available came w about $670,000. In that first year, more than 340 proposals were submitted, 48

The 1914 Belle of Louisville is a National Historic Landmark; it is the oldest operating Mississippi River-style steamboat in the world. The program is administered by the D epartment of the Interior through the Maritime H eritage Program of the National Pa rk Service, and reports w rhe chiefhisrorian. The National Trust for Hi storic Preservation was initi ally a partner, but withdrew from participation and ceded its role w the D epartment oflnterior. State Hisroric Preservation Officers participated in the review process . Since 1998, the National Maritime Alliance, the m ajor catalyst for rhe passage of rhe Act, has focused on advocacy and organizing rhe Maritime Heritage Conferences. Advocacy was necessary following an Environmental Protection Agency ruling rhar banned scrapping of ships abroad without first removing haza rdous materials. The resu lt was a backlog of mothba lled ships and congressional subsidies w pay for scrapping-there were no profits, and therefore there was no money for the grants program. Advocacy by the National Maritime Alliance leadership and supporting organizations resulted in the insertion of alternate fundin g sources in several bills, and even a direct appropriation request supported by five senarors, but without success. The effort continues w seek an alternative w ship recycling as a funding stream for rhe grants program. Nevertheless, because of a spike in scrap metal prices, funds once again became available for the grants program but, in a surprise move, an amerndment was included in the 2010 defen se