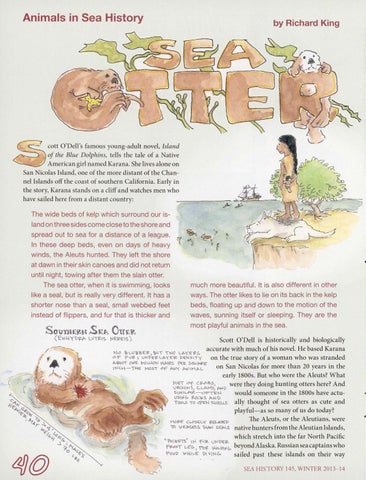 cott O&#39;Dell &#39;s famous young-adult novel, Island of the Blue Dolphins, tells the tale of a Native American girl named Karana. She lives alone on San Nicolas Island, one of the more distant of the Channel Islands off the coast of southern California. Early in the story, Karana stands on a cliff and watches men who have sailed here from a distant country:

The wide beds of kelp which surround our island on three sides come close to the shore and spread out to sea for a distance of a league. &quot;&quot; In these deep beds, even on days of heavy Ii

winds, the Aleuts hunted. They left the shore

at dawn in their skin canoes and did not return until night, towing after them the slain otter. The sea otter, when it is swimming, looks like a seal, but is really very different. It has a shorter nose than a seal, small webbed feet

much more beautiful. It is also different in other ways. The otter likes to lie on its back in the kelp

instead of flippers, and fur that is thicker and

waves, sunning itself or sleeping. They are the

beds, floating up and down to the motion of the most playful animals in the sea.