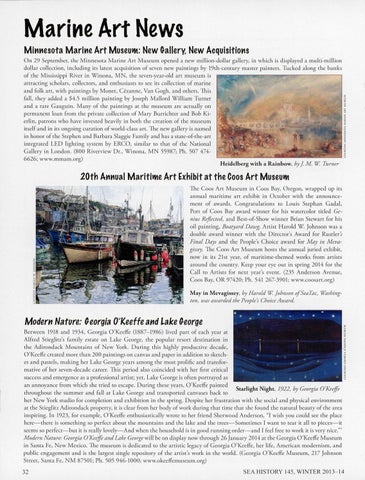 Marit1e Art News Mitn1esota Maritte Art Museut\1: New G-allery, New Acquisitiotts On 29 Seprember, rhe M innesora Ma rine A rt M useum opened a new million-dollar gallery, in wh ich is displayed a mulri-million dollar collecrion, incl uding irs laresr acquisirion of seven new pai ntings by 19rh-cemury m aster painters. Tucked along the banks of the Mississippi River in W ino na, MN, the seven-year-old art museum is attrac ting scholars, collectors, a nd enthusias ts to see its collection of m arine and fo lk a rt, w ith paintings by M onet, Cezanne, Va n Gogh , and others. This fa ll, they added a $4.5 mi ll ion painting by Joseph M alla rd W illiam Turner and a ra re Gaug uin. Many of the paintings at the museum are actually on permanent loan from the pri vate collection of M ary Burrichter and Bob Kierlin, patrons who have inves ted heavily in both the crearion of rhe museum itself a nd in its ongoing curation of world-class arr. The new gallery is named in honor of the Stephen and Barbara Slaggie Fami ly and has a state-of-t he-a rt integrated LED li ghting sys tem by ERCO, similar to that of the N ational Gallery in London. (800 Riverview Dr., Winona, M N 55987; Ph. 507 4746626; www.mm am .org) Heidelberg with a Rainbow, by j. M. W Turner

May in Mevagissey, by Harold W Johnson ofSeaTac, Washington, was awarded the Peoples Choice Award.

Modern Nature: tJ.eorgia o~Keeffe and Lake tJ.eorge Between 1918 a nd 1934, Georgia O 'Keeffe (1 887-1986) lived pan of each yea r at Alfred Stieglitz's fa m ily es tate on Lake G eorge, the popula r resort destination in the Adi rondack Mo untains of New York . During this highly producti ve decade, O'Keeffe created more than 200 paintings on canvas and paper in addition to sketches and pas tels, m aking her Lake G eorge yea rs among the most prolific and transform ative of her seven-decade career. This period also coincided with her first critical success and emergence as a professional artist; yet, Lake George is often portrayed as an annoyance from which she tried to escape. During these years, O'Keeffe painted Starlight Night, 1922, by Georgia O'Keeffe th roughout the summer and fa ll at Lake George and transported canvases back to her New York studio for completion and exhibition in the spring. D espite her fr ustration with the social and physical enviro nment at the Srieglitz Adirondack property, ir is clear from her body of work during that time that she fo und the natural beauty of rhe area inspiring. In 1923, fo r example, O 'Keeffe enthusias tically wro te to her fri end Sherwood Anderson, "I wish yo u could see the place here-there is som ething so perfect abour rhe mountains and the lake and the trees- Sometimes I wa nt to rear it all to pieces-it seem s so perfect- but it is really lovely-A nd when the household is in good running order- and I feel free to work it is very n ice."' Modern Nature: Georgia O'Keeffe and Lake George will be on display now th ro ugh 26 January 2014 at the Georgia O 'Keeffe M useum in Sam a Fe, New M exico. The museum is dedicated to the artistic legacy of Geo rgia O'Keeffe, her life, American modernism, and public engagement and is the largest single repository of the artist's wo rk in the wo rld. (Georgia O 'Keeffe Museum, 217 Johnson Stree t, Santa Fe, N M 87501 ; Ph . 505 946-1000; www.okeeffemuseum.org) 32