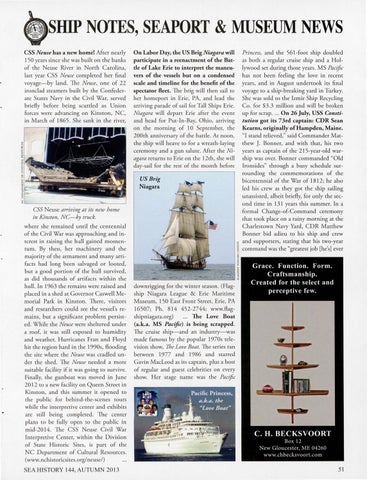 .SHIP NOTES, SEAPORT &amp; MUSEUM NEWS CSS Neuse has a new home! After nearly 150 years since she was built on the banks of the Ne use River in North Carolina, last year CSS Neuse completed her final voyage-by land. The Neuse, one of 22 ironclad steamers built by the Confederate States Navy in the Civil War, served briefly before being scuttled as Union forces were advancing on Kinsron, NC, in March of 1865. She sank in the river,

On Labor Day, the US Brig Niagara will participate in a reenactment of the Battle of Lake Erie to interpret the maneuvers of the vessels but on a condensed scale and timeline for the benefit of the spectator Aeet. The brig will then sail to her homeport in Erie, PA, and lead the arriving parade of sail for Tall Ships Erie. Niagara will depart Erie after the event and head for Put-In-Bay, Ohio, arriving on the morning of 10 September, the 200th anniversary of the battle. At noon, the ship will heave to for a wreath-laying ceremony and a gun salute. After the Niagara returns to Erie on the 12th, she will day-sail for the rest of the month before

where she remained until the centennial of the Civil War was approaching and interest in raising the hull gained momentum. By then, her machinery and the majority of the armament and many artifacts h ad long been salvaged or looted, but a good portion of the hull survived, as did thousands of artifacts within the hull. In 1963 the remains were raised and placed in a shed at Governor Caswell Memorial Park in Kinston. There, visitors and researchers could see the vessel&#39;s remains, but a significant problem persisted. While the Neuse were sheltered under a roof, it was still exposed to humidity and weather. Hurricanes Fran and Floyd hit the region hard in the 1990s, flooding the site wh ere the Neuse was cradled under the shed. The Neuse needed a more suitable faci li ty if it was going to survive. Finally, the gu nboat was moved in June 2012 to a new facility on Queen Street in Kinston, and this summer it opened to the public for behind-the-scenes tours while the interpretive center and exhibits are still being completed. The center plans to be fully open to the public in mid-2014. The CSS Neuse Civil War Interpretive Center, within the Division of State Historic Sites, is part of the NC Department of Cultural Resources. (www.nchistoricsites.org/ neuse/)

Princess, and the 56 1-foo t ship doubled as both a regular cruise ship and a Hollywood set during those years . MS Pacific has not been feeling the love in recent years, and in August undertook its final voyage to a ship-breaking yard in Turkey. She was sold to the Izmir Ship Recycling Co. for $3.3 million and will be broken up for scrap ... . On 26 July, USS Constitution got its 73rd captain: CDR Sean Kearns, originally of Hampden, Maine. &quot;I stand relieved,&quot; said Commander Matthew J. Bonner, and with that, his rwo years as captain of the 215-year-old warship was over. Bonner commanded &quot;Old Ironsides&quot; through a busy sch edule surro unding the commemoratio ns of the bicentennial of the War of 1812; he also led his crew as they got the ship sailing unassisted, albeit briefly, for only the second time in 131 years this summer. In a formal Change-of-Command ceremony that took place on a rainy morning at the Charlestown Navy Yard, CDR Matthew Bonner bid adie u to his ship and crew and supporters, stating that his rwo-year command was the &quot;greatest job [he&#39;s] ever

downrigging for the winter season. (Flagship Niagara League &amp; Erie Maritime Museum, 150 East Front Street, Erie, PA 16507; Ph. 814 452-2744; www.flagshipniagara.org) ... The Love Boat (a.k.a. MS Paci.fie) is being scrapped. The cruise ship-and an industry-was made famo us by the popular 1970s television sh ow, The Love Boat. The series ran berween 1977 and 1986 and starred Gavin Macleod as its captain, plus a host of regular and guest celebrities on every show. Her stage name was the Pacific