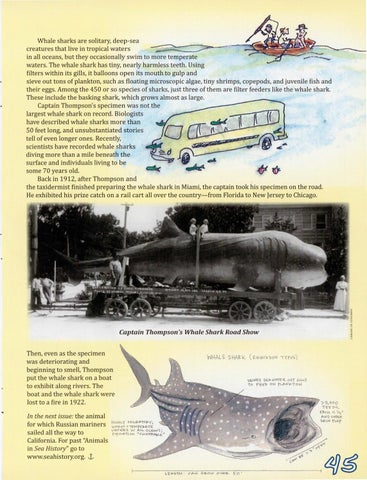 Whale sharks are solitary, deep-s ea creatures that live in tropical waters in all oceans, but they occasionally swim to more temperate waters. The whale shark has tiny, nearly harmless teeth. Using filters within its gills, it balloons open its mouth to gulp and sieve out tons of plankton, such as floating microscopic algae, tiny shrimps, copepods, and juvenile fish and their eggs. Among the 450 or so species of sharks, just three of them are filter feeders like the whale shark. These include the basking shark, which grows almost as large. Captain Thompson&#39;s specimen was not the largest whale shark on record. Biologists have described whale sharks more than

diving more than a mile beneath the surface and individuals living to b e ~ some 70 years old. Back in 1912, after Thompson and the taxidermist finished preparing the whale shark in Miami, the captain took his specimen on the road. He exhibited his prize catch on a rail cart all over the country-from Florida to New Jersey to Chicago.

Captain Thompson&#39;s Whale Shark Road Show Then, even as the specimen was deteriorating and beginning to smell, Thompson put the whale shark on a boat to exhibit along rivers. The boat and the whale shark were lostto a fire in 1922. In the next issue: the animal for which Russian mariners sailed all the way to California. For past &#39;Animals in Sea History&quot; go to www.seahistory.org. J,