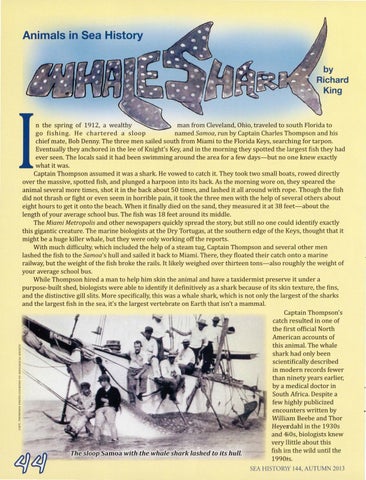 n the spring of 1912, a wealthy man from Cleveland, Ohio, traveled to south Florida to named Samoa, run by Captain Charles Thompson and his go fishing. He chartered a sloop chief mate, Bob Denny. The three men sailed south from Miami to the Florida Keys, searching for tarpon. Eventually they anchored in the lee of Knight's Key, and in the morning they spotted the largest fish they had ever seen. The locals said it had been swimming around the area for a few days-but no one knew exactly what it was. Captain Thompson assumed it was a shark. He vowed to catch it. They took two small boats, rowed directly over the massive, spotted fish, and plunged a harpoon into its back. As the morning wore on, they speared the animal several more times, shot it in the back about 50 times, and lashed it all around with rope. Though the fish did not thrash or fight or even seem in horrible pain, it took the three men with the help of several others about eight hours to get it onto the beach. When it finally died on the sand, they measured it at 38 feet-about the length of your average school bus. The fish was 18 feet around its middle. The Miami Metropolis and other newspapers quickly spread the story, but still no one could identify exactly this gigantic creature. The marine biologists at the Dry Tortugas, at the southern edge of the Keys, thought that it might be a huge killer whale, but they were only working off the reports. With much difficulty, which included the help of a steam tug, Captain Thompson and several other men lashed the fish to the Samoa's hull and sailed it back to Miami. There, they floated their catch onto a marine railway, but the weight of the fish broke the rails. It likely weighed over thirteen tons-also roughly the weight of your average school bus. While Thompson hired a man to help him skin the animal and have a taxidermist preserve it under a purpose-built shed, biologists were able to identify it definitively as a shark because of its skin texture, the fins, and the distinctive gill slits. More specifically, this was a whale shark, which is not only the largest of the sharks and the largest fish in the sea, it's the largest vertebrate on Earth that isn't a mammal. Captain Thompson's catch resulted in one of the first official North American accounts of this animal. The whale shark had only been scientifically described in modern records fewer than ninety years earlier, by a medical doctor in South Africa. Despite a few highly publicized encounters written by William Beebe and Thor Heyeirdahl in the 1930s and 4~0s, biologists knew very Hittle about this fish im the wild until the 1990~s.