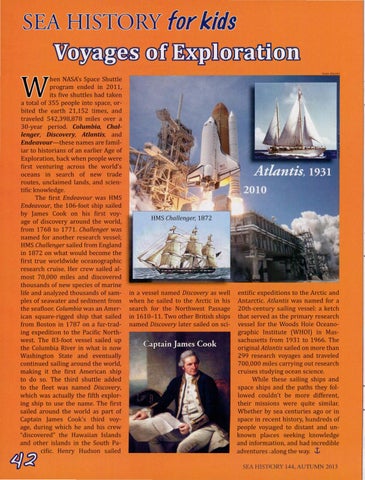 en NASA&#39;s Space Shuttle program ended in 2011, its five shuttles had taken a total of 355 people into space, orbited the earth 21,152 times, and traveled 542,398,878 miles over a 30-year period. Columbia, Challenger, Discovery, Atlantis, and Endeavour-these names are familiar to historians of an earlier Age of Exploration, back when people were first venturing across the world&#39;s oceans in search of new trade routes, unclaimed lands, and scientific knowledge. The first Endeavour was HMS Endeavour, the 106-foot ship sailed by James Cook on his first voyage of discovery around the world, from 1768 to 1771. Challenger was named for another research vessel; HMS Challenger sailed from England in 1872 on what would become the first true worldwide oceanographic research cruise. Her crew sailed almost 70,000 miles and discovered thousands of new species of marine life and analyzed thousands of samples of seawater and sediment from the seafloor. Columbia was an American square-rigged ship that sailed from Boston in 1787 on a fur-trading expedition to the Pacific Northwest. The 83-foot vessel sailed up the Columbia River in what is now Washington State and eventually continued sailing around the world, making it the first American ship to do so. The third shuttle added to the fleet was named Discovery, which was actually the fifth exploring ship to use the name. The first sailed around the world as part of Captain James Cook&#39;s third voyage, during which he and his crew &quot;discovered&quot; the Hawaiian Islands and other islands in the South Pacific. Henry Hudson sailed

in a vessel named Discovery as well when he sailed to the Arctic in his search for the Northwest Passage in 1610-11. Two other British ships named Discovery later sailed on sci-

entific expeditions to the Arctic and Antarctic. Atlantis was named for a 20th-century sailing vessel: a ketch that served as the primary research vessel for the Woods Hole Oceanographic Institute (WHO!) in Massachusetts from 1931 to 1966. The original Atlantis sailed on more than 299 research voyages and traveled 700,000 miles carrying out research cruises studying ocean science. While these sailing ships and space ships and the paths they followed couldn&#39;t be more different, their missions were quite similar. Whether by sea centuries ago or in space in recent history, hundreds of people voycaged to distant and unknown pla1ces seeking knowledge and informffition, and had incredible adventures ;along the way. ..t SEA HIST&lt;ORY 144, AUTUMN 2013