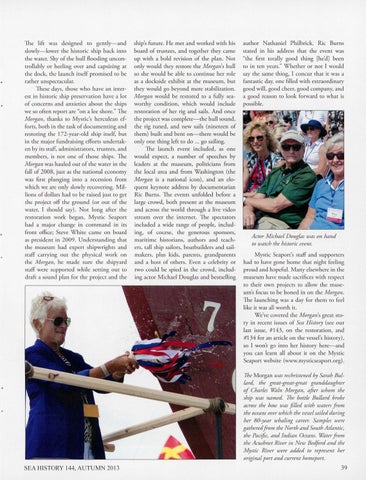 The lift was designed to gently-and slowly-lower the historic ship back into the water. Shy of the hull Aooding uncontrollably or heeling over and capsizing at the dock, the launch itself promised to be rather unspectacular. These days, those who h ave an interest in historic ship preservation have a lot of concerns and anxieties abo ut the ships we so often report are &quot;on a lee sho re.&quot; The Morgan, thanks to Mystic&#39;s herculean efforts, both in the task of documenting and restoring the 172-year-old ship itself, but in the major fundraising efforts undertaken by its staff, administrators, trustees, and m embers, is not one of those ships. The M organ was hauled out of the water in the fall of 2008 , just as the national economy was first plunging into a recession from which we are only slowly recovering. Millions of dollars had to be raised just to get the project off the gro und (or out of the water, I should say) . N o t lo ng after the res toration wo rk began, M ys tic Seaport had a major ch ange in command in its front office; Steve White cam e o n board as president in 2009 . U nderstanding that the museum had expert sh ipwrigh ts and staff carrying out the physical work on the M organ, he m ade sure the shipyard staff were suppo rted while setting out to draft a sound plan fo r the proj ect and the

ship&#39;s future. He met and worked with his board of trustees, and together th ey cam e up with a bold revision of the plan . N ot only would they restore the M organ&#39;s hull so she would be able to continue her role as a dockside exhibit at the museum, but they would go beyond m ere stabilization . Mo rgan would be restored to a fully seaworthy condition , which would include restoration of her rig and sails. And once the project was complete-the hull sound, the rig tuned, and new sails (nineteen of them) built and bent on- there would be only on e thing left to do ... go sailing. The launch event included, as one would expect, a number of speeches by leaders at the museum, politicians from the local area and from Washington (the Mo rgan is a national icon) , and an eloquent keynote address by documentarian Ric Burns. The events unfolded before a large crowd, both present at the museum and across the world through a live video stream over the internet. The spectators included a wide range of people, including, of course, the generous sponsors, m aritime historians, authors and teachers, tall ship sailors, boatbuilders and sailmakers, plus kids, parents, grandparents and a host of others. Even a celebrity or two could be spied in the crowd, including actor Michael Douglas and bestselling

autho r Nathaniel Philbrick. Ric Burns stated in his address that the event was &quot;the first to tally good thing [he&#39;d] been to in ten years.&quot; W hether or not I would say the sam e thing, I concur that it was a fantas tic day, one filled with extraordinary good will, good cheer, good company, and a good reason to look forward to what is possible.

Actor Michael Douglas was on hand to watch the historic event. Mystic Seaport&#39;s staff and supporters had to have gone home that night feeling proud and hopeful. M any elsewhere in the museum have made sacrifices with respect to their own projects to allow the museum&#39;s focus to be honed in on the Morgan . The launching was a day fo r them to feel like it was all worth it. We&#39;ve covered the M organ&#39;s great story in recent issues of Sea H istory (see our last issue, # 143, on the restoration, and #1 34 for an article on the vessel&#39;s history), so I won&#39;t go into her history here-and you can learn all about it on the Mystic Seaport website (www.mys ticseaporr. org). The Morgan was rechristened by Sarah Bullard, the great-great-great granddaughter of Charles Waln Mo rgan, after whom the ship was named. The bottle Bullard broke across the bow was filled with waters from the oceans over which the vessel sailed during her 80-year whaling career. Samples were gatheredfrom the N orth and South Atlantic, the Pacific, and Indian Oceans. Water from the Acushnet River in New Bedford and the Mystic River were added to represent her original p ort and current homeport.