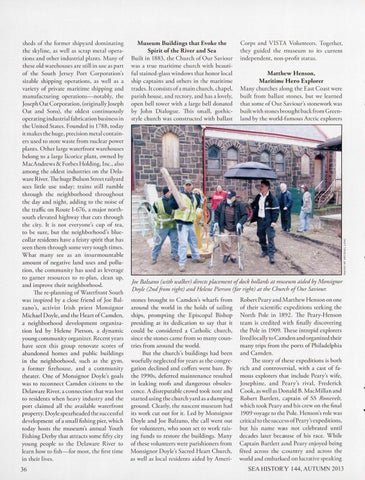 sheds of the for mer shipyard dominati ng the skyline, as well as scrap metal operations and other industrial plants. Many of these old wa rehouses are still in use as pa rt of the South Jersey Port Corporation&#39;s sizable shipping operations, as well as a variety of private maritime shipping and manu fac turing operations-no tably, the Joseph Oat Corporation, (originally Joseph O at and Sons), the oldes t continuo usly operating industrial fa brication business in the United States . Founded in 1788, today it m akes the huge, precision metal contai ners used to store was te from nuclear power plants. Other large waterfro nt wa rehouses belong to a large lico rice pla nt, owned by M acAndrews &amp; Forbes H olding, Inc., also among the oldest industries on the Delaware River. The huge Bulson Street railyard sees little use today; trains still rumble through the neighborhood through out the day and night, adding to the noise of the traffic on Ro ute I-676, a m ajor northsouth elevated highway that cuts through the city. It is not everyone&#39;s cup of tea, to be sure, but the neighborhood &#39;s bluecolla r residents have a feisty spirit t hat has seen them through some ve ry tough times. What m any see as an insurmountable amount of negative land uses and pollution, the community has used as leverage to ga rner resources to re-plan, clean up, and improve their neighborhood . The re-planning of Wa terfront South was inspired by a close fri end of Joe Balzano&#39;s, activist Irish pries t Mon signor Michael Doyle, and the H eart of Camden, a neighborhood development organization led by Helene Pierson, a dynamic young community o rganizer. Recent years have seen this gro up renovate scores of abandoned homes and public buildings in the neighborhood, such as the gym, a former fir ehouse, and a community theater. One of M onsignor Doyle&#39;s goals was to reconnect Camden citizen s to the Delaware River, a connection that was los t to residents when heavy industry and the port claimed all the available waterfro nt property. D oyle spearheaded the successful development of a sm all fi shing pier, which today hosts the museum&#39;s annual Youth Fishing D erby that attracts some fifty city yo ung people to the D elaware R iver to learn how to fis h-for m ost, the fi rst time in their lives. 36

Museum Buildings that Evoke the Spirit of the River and Sea Built in 1883, the C hu rch of Our Saviour was a true ma ritime chu rch w ith beautiful stained-glass windows that honor local ship capta ins and others in the m aritime trades. It consists of a main church, chapel, parish house, and recto ry, a nd has a lovely, open bell tower with a large bell donated by Jo hn Di alog ue. This small, gothicstyle church was constructed with ballas t

Corps and VISTA Volunteers. Together, they g uided the museum to its current independent, non-profit status .

Matthew Henson, Maritime Hero Explorer Many churches alon g the East Coast were built from ballast stones, but we lea rned that some of Ou r Savio ur&#39;s stonework was built with stones bro ught back from Greenland by the world-fam o us Arctic explorers

stones brought to Camden&#39;s wha rfs from aro und the wo rld in the holds of sailing ships, prompting the Episcopal Bishop presiding at its dedication to say that it could be considered a C atholic church, since the stones came from so m any countries from a round the world. But the church &#39;s buildings had been woefully neglected fo r years as the congregation declined and coffers went bare. By the 1990s, deferred maintenance resulted in leaking roofs and dangerous obsolescence. A disrepu table crowd too k note and started using the chu rch yard as a dumping gro und. C lea rly, the nascent museum had its work cut out for it. Led by Mo nsignor Doyle and Joe Balzano, the call went out for volunteers, who soon set ro work raising funds to restore the buildings. Many of these volunteers were parishioners fro m Monsigno r Doyle&#39;s Sacred H eart Church, as well as local residents aided by Ameri-

Robert Peary and Matthew H enson o n one of their scienti fic expeditions seeking the North Pole in 1892. The Peary-H enson team is credited with fin ally discovering the Pole in 1909. These intrepid explorers lived locally to Camden and organized their m any trips fro m the ports of Philadelphia and Camden. The story of th ese expedi tions is both rich and controversial, with a cast of famous explorers that include Peary&#39;s wife, Josephine, and Peary&#39;s rival, Frederick C ook, as well as D onald B. M acMillan and Robert Bartlett, captain of SS Roosevelt, which took Peary and his crew on the fi nal 1909 voyage to rhe Pole. H enson&#39;s role was critical to thesucce:ss of Peary&#39;s exped itions, but hi s name wais n ot celebrated until decades later becarnse of his race. While Captain Bartlett amd Peary enj oyed being fered across the c::ountry and across the world and embarkted o n lucrative speaking