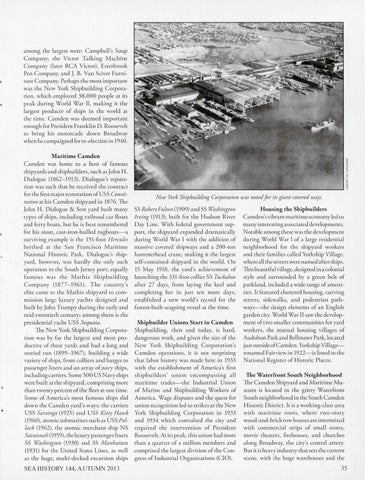 among the largest were: Campbell 's Soup Com pany, che Victor Talking Machin e Compa ny (later RCA Victor) , Esterbrook Pen Compa ny, and]. B. Van Seiver Furniture Company. Perhaps the most important was the New York Shipbuilding Corporation , which employed 38,000 people at its peak during World War ll, making it the largest producer of ships in the wo rld at the time. Camden was deemed important enough fo r President Franklin D . Roosevelt to bring hi s motorcade down Broadway when he ca mpaigned for re-election in 1940.

Maritime Camden Camden was home to a host of fa mous shipyards and shipbuilders, such as John H. Dialogue (1862- 1913). Dialogue's rep utation was such that he received the contract for the first major restoration ofUSS Constitution at his Camden shipyard in 1876. The John H. Dialogue & Son ya rd built many types of ships, including railroad ca r Aoats and ferry boats, but he is best remembered for his stout, cast-iron-hulled tugboats-a surv ivin g example is the 151-foot Hercules berthed at the Sa n Fra ncisco Maritime National Historic Park. Dialogue's shipyard, however, was hardly the on ly such operation in che South Jersey port; equally famous wa s the Mathis Shipbu ildin g Company (1877-1961). T he cou ntr y's elite came to the Mathis shipyard to commission large luxury yachts designed and built by John T rumpy during the early and mid-twentieth century; among them is the presidential yacht USS Sequoia. The New York Shipbuilding Corporation was by far the largest and most productive of these yards and h ad a long and storied run {1899-1967), building a wide variety of ships, from colliers and barges to passenger liners and an array of navy ships, including carriers. Some 500 US Navy ships were built at the shipyard, comprising more than twenty percent of the fleet at one time. Some of America's most famous ships slid down the Camden yard's ways: the carriers USS Saratoga (1925) and USS Kitty Hawk (1960), atom ic submarines such as USS Pollack (1962), the atomic merch ant ship NS Savannah (1959), the luxury passenger liners SS Washington (1930) and SS Manhattan (1931) for the United States Lines, as wel l as the huge, multi-decked excursion ships SEA HISTORY 144,AUTUMN 20 13

SS Robert Fulton (1909) and SS Washington Irving (1913), built for the Hudson River Day Line. With federal government support, the shipya rd expanded dramatically during World War I with the addition of massive covered shipways and a 200-ton h ammerhead crane, making it the largest self-contained shi pyard in the world. On 15 May 1918, the ya rd 's achievement of launching the 331-foot collier SS Tuckahoe after 27 days, from layin g the keel and completi ng her in just ten more days, established a new wo rld 's reco rd for the fastest-built seagoing vessel at the time.

Shipbuilder Unions Start in Camden Shipbuilding, then and today, is hard, dangerous work, and given the size of the New York Shipbuildin g Corporation's Camden operations, it is not surprising that labor history was made here in 1933 wi th the establishment of America's first shipbuilders' union enco mp assi ng all maritime trades-the Industrial Union of Marine and Shipbuilding Workers of America. Wage disputes and the ques t for union recognition led to strikes at the New York Shipbuilding Corporation in 1933 and 1934 which convulsed the city and required che intervention of President Roosevelt. At its peak, chis union had more than a quarcer of a million members and comprised the largest division of the Congress oflndustrial Organizations (CIO).

Housing the Shipbuilders Camden's vibrant maritime economy led to many interesting associated developments. Notable among these was the development during World War I of a large residentia l neighborhood for che shipya rd workers and their fami lies called Yorkship Vi llage, where all the streets were named after ships. Th is beautiful village, designed in a colonial style and surrounded by a green belt of parkland, included a wide range of amenities. It featured clu stered housing, curving streets, sidewalks, and pedestrian pathways- the desig n elements of an English garden city. World War II saw the development of two smaller communities for yard workers, the mutual housing villages of Audubon Park and Bellmawr Park, located just outside of Camden. Yorkship Villagerenamed Fairview in 1922-is listed in the National Register of Historic Places. The Waterfront South Neighborhood The Camden Shipyard and Maritime Museum is located in the gritty Waterfront South neighborhood in the South Camden Historic District. It is a working-class area with maritime roots , where two-story wood-and-brick row houses are intermixed wi th commercial strips of small stores, movie theaters, firehouses, and churches along Broadway, the city's central artery. But it is heavy industry that sets the current scene, with the huge warehouses and the 35