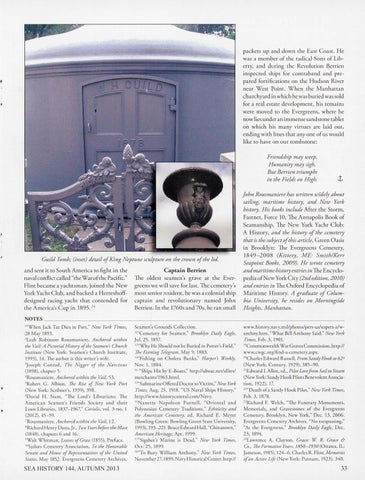 packets up and down the East Coast. H e was a m ember of the radical Sons of Liberty, and duri ng the Revolution Berrien inspected ships fo r co ntra band and prepared fortifications on the Hudson Ri ve r near W est Point. W hen the Ma nhatta n churchyard in which he was buried was sold for a real estate development, his remains were moved to the Evergreens, where he now lies under an immense sandstone tablet on which h is ma ny virt ues are laid out, ending with lines that any one of us wo uld like to h ave on our tombstone:

Friendship may weep, H umanity may sigh, But Berrien triumphs in the Fields on High.

and sent it to South A merica to fight in the naval confli ct called &quot;the Warofthe Pacific.&quot; Flint became a yachtsm an, joined th e New York Yacht C lub, and backed a Herresh offdesigned racing yacht that contended for the America&#39;s C up in 1895. 24

Captain Berrien The oldest seamen&#39;s grave at the Evergreens we will save for last. The cem etery&#39;s mos t senior resident, he was a colo nial ship captain and revolutionary named John Berrien. In the 1760s and 70s, he ran sm all

john Rousmaniere has written widely about sailing, maritime history, and N ew York history. H is books include After the Storm, Fas tnet, Force 10, The A nnapolis Book of Seam anship, The New York Yach t C lub: A History, and the histo ry of the cemetery that is the subject ofthis article, G reen Oasis in Brooklyn: The Evergreens Cemetery, 1849- 200 8 (Kittery, ME: Smith/Kerr Seapoint Books, 2 009). H e wrote cemetery and maritime history entries in The Encyclopedia of New York C ity (2nd edition, 2010) and entries in The Oxford Encyclopedia of M a ritime History. A graduate of Columbia University, he resides on Morningside H eights, M anhattan.

Guild Tomb; (inset) detail ofKing Neptune sculpture on the crown of the lid.