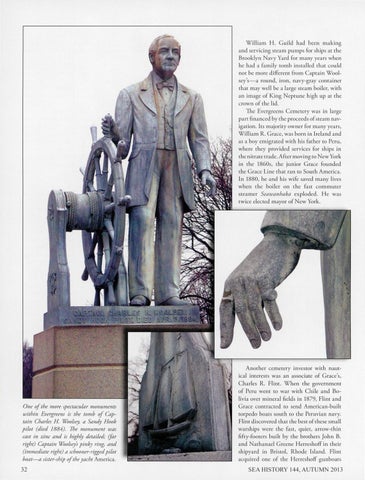 William H. G uild had been makin g and servicing steam pumps for ships at the Brooklyn Navy Ya rd for many yea rs when he had a family tomb installed that could not be more different from Capta in Woolsey&#39;s-a round, iron , navy-gray container that may well be a large steam boiler, with a n image of King Neptune h igh up at the crown of the lid . The Evergreens Cemetery was in large part financed by the proceeds of steam navigation . Its majority owner for m a ny yea rs, William R. Grace, was born in Irela nd an d as a boy emi grated wit h his father to Peru, where they provided services for ships in the nitrate trade. After moving to New York in the 1860s, the junior Grace founded the G race Line that ran to South America. In 1880, he a nd his wife saved ma ny lives when the boiler on the fast commuter stea mer Seawanhaka exploded . H e was twice elected mayo r of New York.

One of the more spectacular monuments within Evergreens is the tomb of Captain Charles H Woolsey, a Sandy Hook pilot (died 1884). The monument was cast in zinc and is highly detailed; (far right) Captain Wools-eys pinky ring, and (immediate right) a schooner-rigged pilot boat-a sister-ship of the yacht America.

Another cemetery investor with nautical interests was an associate of Grace&#39;s, Charles R. Flint. When the govern ment of Peru went to war with Chile and Bolivia over mineral fields in 1879, Flint and Grace contracted to send American-built torpedo boats south to the Peruvian navy. Flint discovered that the best of these sm all warships were the fast, quiet, arrow-thin fifty-footers built by the brothers John B. and Nathanael Greene Herreshoff in their shipya rd in Bristol, Rhode Island. Flint acquired one of the Herreshoff gunboats