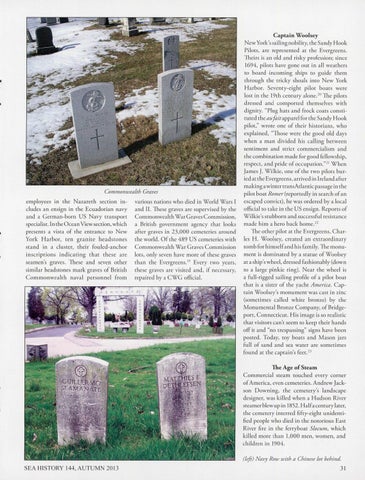 employees in the Nazareth section includes an ensign in the Ecuadorian navy and a German-born US Navy transport specialist. In the Ocean View section, which presents a vista of the entrance to New York Harbor, ten granite head stones stand in a cluster, their fouled-anchor inscriptions indicating that these are seamen&#39;s graves. These and seven other similar headstones mark graves of British Commonwealth naval personnel from

various nations who died in World Wars I and II. These graves are supervised by the Commonwealth War Graves Commission, a British government agency that looks after graves in 23,000 cemeteries around the world. Of the 489 US cemeteries with Commonwealth War Graves Commission lots, only seven have more of these graves than the Evergreens. 19 Every two yea rs, these graves are visited and, if necessary, repaired by a CWG official.

Captain Woolsey N ew York&#39;s sailing nobility, the Sandy Hook Pilots, are represented at the Evergreens. 1h eirs is an old and risky profession; since 1694, pilots have gone out in all weathers to board incoming ships to guide them through the tricky shoals into New York Harbor. Seventy-eight pilot boats were lost in the 19th century alone. 20 1 he pilots dressed and comported themselves with dignity. &quot;Plug hats and frock coats constituted the aufaitapparel for the Sandy Hook pilot,&quot; wrote one of their historians, who explained, &quot;Those were the good old days when a man divided his calling between sentiment and strict commercialism and the combination made for good fellowship, respect, and pride of occupation.&quot; 2 1 When James]. Wilkie, one of the two pilots buried at the Evergreens, arrived in Ireland after makinga winter transAdantic passage in the pi lot boat Romer (reportedly in search of an escaped convict), he was ordered by a local official to take in the US ensign. Reports of Wilkie&#39;s stubborn and successful resistance made him a hero back home. 22 The other pilot at the Evergreens, Charles H. Woolsey, created an extraordinary tomb for himself and his family. The monument is dominated by a statue of Woolsey at a ship&#39;s wheel, dressed fashionably (down to a large pinkie ring). Near the wheel is a full-rigged sailing profile of a pilot boat that is a sister of the yacht America. Captain Woolsey&#39;s monument was cast in zinc (sometimes called white bronze) by the Monumental Bronze Company, of Bridgeport, Con necticut. His image is so realistic that visitors can&#39;t seem to keep their hands off it and &quot;no trespassing&quot; signs have been posted. Today, toy boats and Mason jars full of sand and sea water are sometimes found at the captain&#39;s feet. 23 The Age of Steam Commercial steam touched every corner of America, even cemeteries. Andrew Jackson Downing, the cemetery&#39;s landscape designer, was killed when a Hudson River steamer blew up in 1852. Haifa century later, the cemetery interred fifty-eight unidentified people who died in the notorious East River fire in the ferryboat Slocum, which killed more rhan 1,000 men, women, and children in 1904. (Left) Navy Row with a Chinese Lot behind.