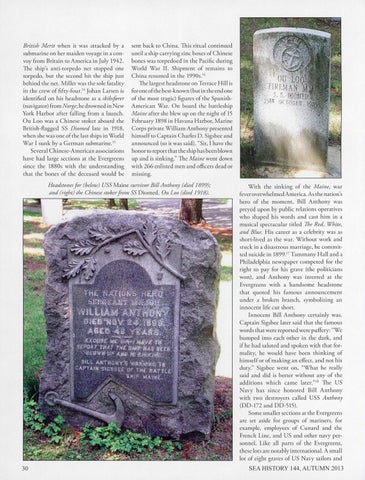 British Merit when it was attacked by a submarine on her maiden voyage in a convoy from Britain to America in July 1942. The ship&#39;s a nti-torpedo net stopped one torpedo, but the second hit the ship just behind the net. Miller was the sole fata lity in the crew of fifty-four. 14 Johan Larsen is identified on his headstone as a skibsforer (navigator) from Norge; he drowned in New York Harbor after fa lling from a launch . Ou Loo was a Chinese stoker aboard the British-flagged SS Diomed late in 1918, when she was one of the last ships in World War I sunk by a German submarine. 15 Several Chinese-American associations have had large sections at the Evergreens since the 1880s with the understanding that the bones of the deceased would be

sent back to China. This ritual continued until a ship carrying zinc boxes of Chinese bones was torpedoed in the Pacific during World War II. Shipment of remains to China resumed in the 1990s. 16 The largest headstone on Terrace Hill is for one of the best-known (b ut in the end one of the most uagic) figures of the SpanishAmerican War. On board the battleship Maine after she blew up o n the night of 15 February 1898 in Havana Harbor, Marine Corps private William Anthony presented himself to Captain Charles D. Sigsbee and announced (so it was said), &quot;Sir, I have the honor to report that the ship has been blown up and is sinking.&quot; The Maine went down with 266 enli sted men and officers dead or missing.

With the sinking of the Maine, war feveroverwhelmedAmerica.As the nation&#39;s hero of the moment, Bill Antho ny was preyed upon by public relations operatives who shaped his words and cast him in a musical spectacular titled The Red, White, and Blue. His career as a celeb rity was as short-lived as the war. Without work and stuck in a disastrous marriage, he committed suicide in 1899.17 Tammany Hall and a Philadelphia newspaper competed for the right to pay for his grave (the politicians won), and Anthony was interred at the Evergreens with a handsome headstone that quoted his famous announcement under a broken branch, symbolizin g an innocent life cut short. Innocent Bill Anthony certainly was. Captain Sigsbee later said that the famous words that were reported were puffery: &quot;We bumped into each other in the dark, and ifhe had saluted and spoken with that formality, he would have been thinking of himself or of making an effect, and not his duty.&quot; Sigsbee went on, &quot;What he really said and did is better without any of the additions which came later.&quot; 18 The US Navy has since honored Bill Anthony with two destroyers called USS Anthony (DD-172 and DD-515). Some smaller sections at the Evergreens are set aside for groups of mariners, for example, employees of Cunard and the French Line, and US and other navy personnel. Like all parts of the Evergreens, these lots are notably international. A small lot of eight graves of US Navy sailors and