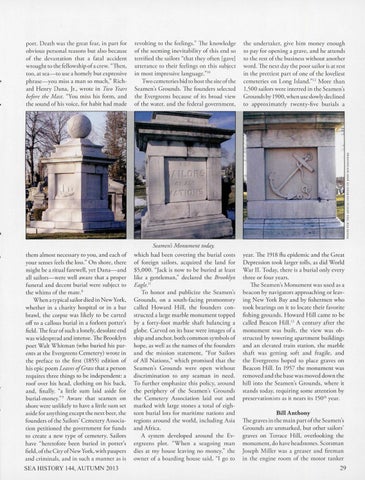 port. Death was the great fear, in part for obvious personal reasons but also because of the devastation that a fatal accident wrought to the fellowship of a crew. &quot;Then, too, at sea-to use a homely but expressive phrase-you miss a man so much,&#39;&#39; Richard Henry Dana, Jr., wrote in Two Years before the Mast. &quot;You miss his form, and the sound of his voice, for habit had made

revolting to the feelings.&quot; The knowledge of the seeming inevitability of this end so terrified the sailors &quot;that they often [gave] utterance to their feelings on this subject in most impressive language.&quot; 10 Two cemeteries bid to host the site of the Seamen&#39;s Grounds. The founders selected the Evergreens because of its broad view of the water, and the federal government,

the undertaker, give him money enough to pay for opening a grave, and he attends to the rest of the business without another word. The next day the poor sailor is at rest in the prettiest part of one of the lovel iest cemeteries on Long Island.&quot; 12 More than 1,500 sai lors were interred in the Seamen&#39;s Grounds by 1900, when use slowly declined to approximately twenty-five burials a

Seamen&#39;s Monument today. them almost necessary to yo u, and each of your senses feels the loss.&quot; On shore, there might be a ritual farewell, yet Dana-and all sailors-were well aware that a proper funeral and decent burial were subject to the whims of the mate. 8 W hen a typical sa ilor died in New York, whether in a charity hospital or in a bar brawl, the corpse was likely to be carted off to a callous burial in a forlorn potter&#39;s field. The fear of such a lonely, desolate end was widespread and intense. The Brooklyn poet Walt Whitman (who buried hi s parents at the Evergreens Cemetery) wrote in the preface to the first (1855) edition of his epic poem Leaves ofGrass that a person requ ires three things to be independent: a roof over his head, clothing on his back, and, finally, &quot;a little sum laid aside for burial-money.&quot; 9 Aware that seamen on shore were unlikely to have a little sum set aside for anything except the next beer, the founders of the Sailors&#39; Cemetery Association petitioned the government for funds to create a new type of cemetery. Sailors have &quot;heretofore been buried in potter&#39;s field, of the City ofN ew York, with paupers and criminals, and in such a manner as is SEA HISTORY 144, AUTUMN 20 13

which had been covering the burial costs of foreign sailors, acquired the land for $5 ,000. &quot;Jack is now to be buried at least like a gentleman,&quot; declared the Brooklyn

Eagle. 11 To honor and publicize the Seamen&#39;s Grounds, on a south-facing promontory called Howard Hill, the founders constructed a large marble monument topped by a forty-foot marble shaft balancing a globe. Carved on its base were images of a sh ip and anchor, both common symbols of hope, as well as the names of the founders and the mission statement, &quot;For Sailors of All Nations,&quot; which promised that the Seamen&#39;s Grounds were open without discrimination to any seaman in need. To further emphasize this policy, around the periphery of the Seamen&#39;s Grounds the Cemetery Association laid our and marked with large stones a total of eighteen burial lots for maritime nations and regions around the world, including Asia and Africa. A system developed around the Evergreens plot. &quot;When a seagoing man dies at my house leaving no money,&#39;&#39; the owner of a boarding house said, &quot;I go to

year. The 1918 Hu epidemic and the Great Depression took larger tolls, as did World War II. Today, there is a burial only every three or four years. The Seamen&#39;s Monument was used as a beacon by navigators approaching or leaving New York Bay and by fishermen who took bearings on it to locate their favorite fishing gro unds. Howard Hill came to be called Beacon Hill. 13 A century after the monument was built, the view was obstructed by towering apartment bui ldings and an elevated train station, the marble shaft was getting soft and fragile , and the Evergreens hoped to place graves on Beacon Hill. In 1957 the monument was removed and the base was moved down the hill into the Seamen&#39;s Gro unds, where it stands today, requiring some attention by preservationists as it nears its 150&#39;h year.

Bill Anthony The graves in the main part of the Seamen&#39;s Grounds are unmarked, but other sailors&#39; graves on Terrace Hill, overlooking the monument, do have headstones . Scotsman Joseph Miller was a greaser and fireman in the engine room of the motor tanker 29