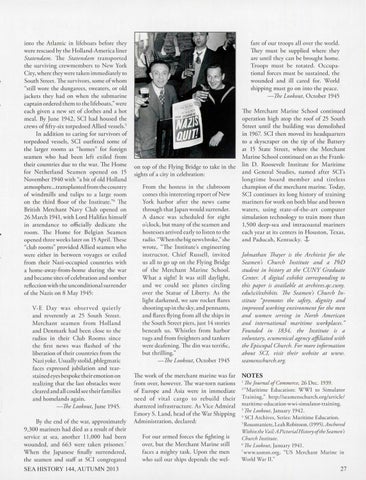 into the Atlantic in lifeboats before they were rescued by the H olland-America liner Statendam . The Statendam tra nsported the surviving crewm embers to New York C ity, where they were taken immediately to South Street. The survivors, som e of whom &quot;still wo re the dun garees, swearers, or old jackers they had on when the submarine captain ordered them to the life boats,&quot; we re each given a new set of clo thes a nd a hot m eal. By June 1942, SCI had housed the crews of fifty-six torpedoed A llied vessels. 5 In addition to caring for survivors of torpedoed vessels, SCI outfitted some of the larger room s as &quot;homes&quot; for foreign seamen who had been left exiled from their countries due to the wa r. The H ome for Ne therl a nd Seam en o pened on 15 November 1940 with &quot;a bit of old H olland atmosphere ...tra nsplanted from the country of windmills a nd t ulips to a large room on the third fl oor of the Institute.&quot;6 The British Mercha nt Navy C lub opened on 26 M arch 1941, with Lord H alifax h imself in at tenda nce to offi cially dedicate rhe room . Th e Home for Belgia n Sea men opened three wee ks later on 15 April. These &quot;club room s&quot; provided A llied seam en who we re either in between voyages or exiled from their Nazi-occupied counuies with a home-away-from-home during the wa r and beca me sires of celebration and somber refl ection with the unconditional surrender of the Nazis on 8 May 1945: V-E D ay was o bse rve d qui e tl y a nd reverently at 25 South Street. Merch a nt seam en fro m H oll and and D enmark had been close to the radios in their C lub Rooms since t he first news was flash ed of the liberation of their countries from the Nazi yoke. Usually stolid, phlegm atic faces expressed jubilation and rearsrained eyes bespoke their emotion o n reali zing that the last obstacles were clea red and all could see rhei r fam iIies and homela nds again. -The Lookout, June 1945. By the end of the war, approxim ately 9,3 00 mari ners had died as a res ult of their service at sea, ano ther 11 ,000 had been wo unded, and 663 were taken prisoner. 7 W h en the Japanese fin ally surrendered , the seamen and staff at SCI congregated SEA HISTORY 144, AU TU MN 201 3

fa re of our troo ps all over the world. They must be supplied where they are until they ca n be brought hom e. Troops must be rotated . O ccupational forces must be sustained, the wo unded and ill cared for. W orld shipping must go on into the peace. -The Lookout, O ctober 1945

on top of the Flying Bridge to rake in the sights of a ciry in celebrati on: From rhe hostess in the clubroom comes this interesting re port of New York harbor after the news came th ro ugh that Japan wo uld surrender. A dance was scheduled fo r eight o&#39;clock, but ma ny of the seamen a nd hostesses a rri ved ea rly to listen to the radio. &quot;When the big news broke,&quot; she w rote, &quot;The In stitute&#39;s engineering instructor, C hief Ru ssell, invi ted us all to go up on the Flying Bridge of the Mercha nt Ma rine School. W hat a sight! Ir was still daylight, and we co uld see planes circling over the Statue of Liberty. As the light darkened , we saw rocker flares shooting up in the sky, and pennants, and flares fl ying fro m all the ships in the South Street piers, just 14 stories beneath us. W histles fro m ha rbor rugs and fro m freigh ters and tankers were deafening. The din was terrific, but th rilling.&quot; -The Lookout, October 1945 Th e wo rk of the merchant m arine was far fro m over, however. The war-torn nations of Europe and Asia were in immediate need o f v ira l ca rgo to rebuild their shattered infras tructure. As Vice Admiral Emory S. Land, head of the Wa r Shipping Administration, declared: For our a rmed forces the fighting is over, but the Mercha nt M arine still faces a m igh ty task. U pon the men who sail our ships depends the wel-

Johnathan Thayer is the Archivist for the Seamen&#39;s Church Institute and a PhD student in history at the CUNY Graduate Center. A digital exhibit corresponding to this paper is available at archives.qc.cuny. edulsci/exhibits. The Seamen&#39;s Church Institute &quot;promotes the safety, dignity and imp roved working environment fo r the men and women serving in N orth American and international maritime workplaces.&quot; Founded in 1834, the Institute is a voluntary, ecumenical agency affiliated with the Episcopal Church. For more information about SCI, visit their website at www. seamenschurch. org.