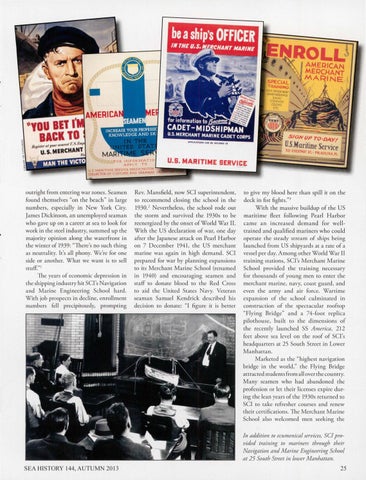 outright from entering wa r zones . Seamen fo und themselves "on the beach " in large numbers, especially in N ew York C ity. James Dickinson, an unemployed seaman who gave up on a career at sea to look fo r work in the steel industry, summed up the majority opinion along the waterfront in the winter of 1939: "There's no such thing as neutrality. It's all phony. We're fo r one side or another. W hat we wa nt is to sell stuff." 1 The years of economic depression in the shi pping industry hit SCI's Navigation and Marine Engineering School hard. W ith job pros pects in decline, enrollment numbers fell precipitously, prompting

Rev. Mansfield, now SCI superintendent, to recommend closing the school in the 193 0.2 Nevertheless, the school rode out the storm and survived the 1930s to be reenergized by the onset of World War II. W ith the US declaration of wa r, one day after the Japanese arrack on Pearl H arbor on 7 D ecember 1941, the US merchant marine was again in high demand. SCI prepared for war by planning expansions to its Merchant Marine School (renamed in 1940) and encouraging sea men and staff to donate blood to the Red Cross to aid the U nited Stares N avy. Veteran seaman Samuel Kendrick described his decision to donate: "I figure it is better

to give my blood here than spill it on the deck in fist fi ghrs." 3 W ith the massive buildup of the US maritime Beer fo llowing Pea rl H arbor ca me an increased d em and for welltrained and qualified mariners who could operate the steady strea m of ships bein g launched fro m US shipya rds at a rare of a vessel per day. Among other World Wa r II training stations, SCI's M erchant M arine School provided the training necessary for thousands of young men to enter the merchant marine, navy, coast guard, and even the army and air fo rce. Wartime expansion of rhe school culminated in construction of the spectacular rooftop "Flyin g Bridge" and a 74 -foor replica pilothouse, built to the dimensions of the recently launched SS America, 212 feet above sea level on the roof of SCI's headquarters at 25 South Stree t in Lower Manhatta n. Marketed as the "highest navigation bridge in the world," the Flying Brid ge attracted students fro m all over the cou nrry. M any seamen who had abandoned the profession or let their licenses expire during the lean yea rs of the 193 0s returned to SCI to rake refresher courses and renew their certifications. The Merchant Mari ne School also welcomed men seeking the

In addition to ecumenical services, SCI provided training to mariners through their Navigation and Marine Engineering School at 25 South Street in lower Manhattan.