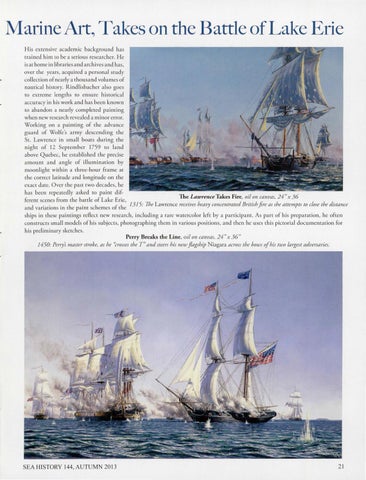 Marine Art, Takes on the Battle of Lake Erie His ex tensive academic backg round has trained him to be a serious researcher. H e is at home in libraries and archives a nd has, ove r the years, acquired a personal study collection of nearly a thousa nd volumes of nautical hi story. Rindlisbacher also goes to extreme lengths to ensure historical accuracy in his work and has been kn own to abandon a nearly completed painting when new research revealed a minor error. W ork ing on a painting of the ad va nce guard of Wolfe&#39;s army descending the St. Law rence in sm all boats during the night of 12 September 1759 to la nd above Quebec, he established the precise amount a nd angle of illumination by moonlight within a three-hour frame at the correct latitude and longitude on the exact date. O ver the past two decades, he has been repeatedl y as ked to paint di ~ The Lawrence Takes Fire, oil on canvas, 24&quot; x 3 6 fe rent scenes from the battle of La ke Erie, 13 15 : The Lawrence receives heavy concentrated British fire as she attemp ts to close the distance and va riations in the paint schemes of the ships in these paintings reflect new research, including a rare watercolor left by a participant. As part of his preparation, he often constructs small models of his subjects, photographing them in va rious positions, and then he uses this pictorial documentation for his preliminary sketches . Perry Breaks the Line, oil on canvas, 24&quot; x 36&quot; 1450: Perry&#39;s master stroke, as he &quot;crosses the T &quot; and steers his new flagship Niagara across the bows of his two largest adversaries.