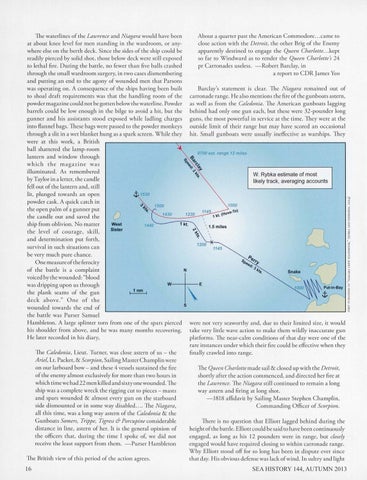 The waterlines of the Lawrence and Niagara would have been About a quarter past the A merican Commodore .. . came to close action wit h the Detroit, the other Brig of the Enemy at about knee level for men standing in the ward room, or anywhere else on the berth deck. Si nce the sides of the ship could be apparently destined to en gage the Queen Charlotte . .. kept so fa r to Wi ndwa rd as to render the Queen Charlo tte's 24 readily pierced by solid shot, those below deck were still exposed pr Carronades useless. - Robert Barclay, in to lethal fire. During the battle, no fewer than five balls crashed through the small wa rdroom surgery, in two cases dismembering a report to C D R James Yeo and putting an end to the agony of wounded men that Parsons Barclay's state ment is clear. The Niagara remained out of was operating on . A consequence of the ships having been built to shoal draft requirements was that the handling room of the carronade range. He also mentions the fire of the gunboats as tern, powder m agazine could not be go tten below the waterline. Powder as well as fro m the Caledonia. The A merican gunboats lagging barrels could be low enough in the bilge to avoid a hit, but the behind had only one gun each, but these were 32-pounder lon g gunner and his assistants stood exposed while ladling charges guns, the most powerfu l in service at the time. They were at the into flannel bags . These bags were passed to the powder mon keys outside limit of t heir range but may have scored an occasional through a slit in a we t blanket hung as a spark screen . W hile they hit. Sm all gunboats were usually ineffective as warships. They were at this work, a British ball shattered the lamp-room 0700 est. range 12 miles lantern and window through ~ ~ii),. .... (\/. w hi c h th e m agaz in e was ~:,,~ illuminated. As rem embered W. Rybka estimate of most +~ by Taylor in a letter, the candle likely track, averaging accounts fell out of the lantern and, still .;!;. 1530 lit, plunged towards an open powder cask. A quick catch in 1500 the open palm of a gunner put the candle out and saved the ' West 1kt. ship from oblivion. N o m atter '\ 1.5 miles Sister the level of courage, skill, and determination put forth, 1200 survival in such situations can 1145 be very much pure chance. One measure of the ferocity of the battle is a complaint voiced by the wounded : "blood was dripping upon us through the pla nk seam s of the gun d eck a b ove ." O n e o f th e wounded towa rds the end of the battle was Purser Samuel Hambleton. A large splinter torn fro m one of the spars pierced were not very seaworthy and, due to their limited size, it wo uld his shoulder from above, and he was many months recovering. take very little wave action to make t hem w ildly inaccurate gun H e later recorded in his di ary, platforms. The near-calm co nditions of that day were one of the rare instances under which their fire could be effective when they The Caledonia, Lieut. Turner, was close as tern of us - the fin ally crawled into range. Ariel, Lt. Packet, & Scorpion, Sailing Master C hamplin were on our larboard bow - and these 4 vessels sustained the fi re The Queen Charlotte m ade sail & closed up w ith the D etroit, of the enemy almost exclusively fo r more tha n two hours in shortly after the action commenced , a nd directed h er fire at which time we had 22 men killed and sixty one wounded. The the Lawrence. The Niagara still continued to rem a in a lon g ship was a complete w reck the rigging cut to pieces - mas ts way as tern and firin g at long sho t. and spars wounded & almost every gun on the starboard -18 18 affidavit by Sailing Mas ter Stephen C h amplin, side di smounted or in some way disabled .... The Niagara, Commanding O ffi cer of Scorpion. all this time, was a long way astern of the Caledonia & the G unboats Somers, Trippe, Tigress & Porcupine considerable There is no q uestion that Elliott lagged behind during the distance in line, as tern of her. It is th e general opin ion of height of the battle. Elliott could be said to have been continuously the officers that, durin g the time I spoke of, we d id not engaged, as long as his 12 pounders were in ra nge, but closely receive the least support from them . - Purser H ambleton engaged wou ld h ave required closing to within car ronade ra nge. W hy Ell iott stood off for so long has been in di spute ever since The British view of this period of the action agrees. that day. H is obvious defense was lack of w in d . In sul t ry a nd light