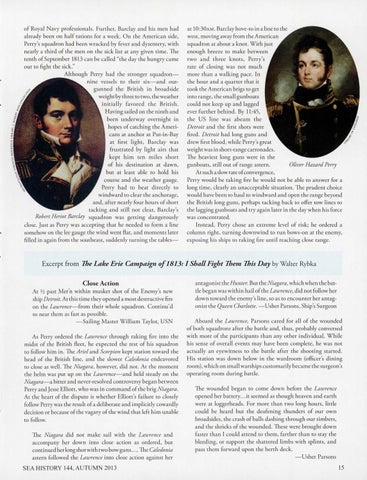 of Royal Navy professionals. Further, Barclay and his men had already been on half rations for a week. On the American side, Perry&#39;s squadron had been wracked by fever and dysentery, with nearly a third of the men on the sick list at any given time. The tenth of September 181 3 can be called &quot;the day the hungry cam e out to fight the sick .&quot; Although Perry had the stronger squad ronnine vessels to their six-and outgunned the British in broadside weight by three to two, the weather initially favored the British . Having sailed on the ninth and been underway overnight in hopes of catching the Americans at anchor at Put-in-Bay at first light, Ba rclay was frustrated by light airs that kept him ten miles sho rt of his des tination at daw n, but at least able to hold his course and the weather gauge. Perry had to beat directly to w indward to clear the anchorage, and, after nearly four hours of short tacking and still not clear, Barclay&#39;s Robert Heriot Barclay squad ro n was getting da ngero usly close. Just as Perry was accepting that he needed to fo rm a line somehow on the lee gauge the wind went flat, and m om ents later filled in again from the southeast, suddenly turning the tables-

at 10:30AM . Barclay hove-to in a line to the wes t, m oving away from the A merican squad ron at about a knot. With just enough breeze to m ake between two and three knots, Perry&#39;s rate of closing was not much m ore than a walking pace. In the hour and a quarter that it took the A merican brigs to get into ra nge, the sm all gunboats could no t keep up and lagged ever further behind. By 11:45, the US line was abeam the D etroit and the fi rst shots were fired . D etroit h ad long guns and drew first blood, while Perry&#39;s great weight was in short-range carronades. The heaviest long guns were in the gunboats, still out of range astern. Oliver Hazard Perry At such a slow rate of convergence, Perry would be taking fire he wo uld not be able to answer for a long time, clearly a n unacceptable situation. The prudent choice would have been to haul to windward and open the range beyond the British long guns, perhaps tacking back to offer tow lines to the lagging gunboats and try again later in the day when his force was concentrated . Instead, Perry chose an extreme level of risk; he ordered a column right, turning downwind to run bows-on at the enemy, exposing h is sh ips to raking fire until reaching close range.

Excerpt from The Lake Erie Campaign of 1813: I Shall Fight Them This Day by Walter Rybka

Close Action At Yz pas t Mer&#39;n w ithin musket sho t of the Enemy&#39;s new ship D etroit. At this time they opened a most destructive fi re on the Lawrence-from their whole squadron. Continu&#39; d to near them as fast as possible. -Sailing M as ter William Taylor, USN As Perry ordered the Lawrence through raking fire into the m idst of the British fleet, he expected the rest of his squadron to fo llow him in . The Ariel and Scorpion kept station toward the head of the British line, and the slower Caledonia endeavored to close as well. The Niagara, however, did no t. At the moment the helm was put up on the Lawrence-and held steady on the Niagara-a bitter and never-resolved controversy began between Perry and Jesse Elliott, who was in command of the brig Niagara. At the heart of the dispute is whether Elliott&#39;s failure to closely follow Perry was the result of a deliberate and implicitly cowardly decision or because of the vaga ry of the wind that left h im unable to follow. The Niagara did not m ake sail with the Lawrence and accompany her down into close action as ordered, but continued her long shot with two bow guns .... The Caledonia astern followed the Lawrence into close action agains t her

antagonist the H unter. But the Niagara, which when the battle began was w ithin hail of the Lawrence, did not follow her down towa rd the enemy&#39;s line, so as to encounter her antagonist the Queen Charlotte. -Usher Parsons, Ship&#39;s Surgeon Aboard the Lawrence, Parsons cared fo r all of the wounded of both squ adrons after the battle and, thus, probably conversed with more of the participants than any o ther individual. While his sen se of overall events may h ave been complete, he was not actually an eyewitness to the battle after the shooting started. His station was down below in the wa rdroom (officer&#39;s dining room), wh ich on sm all warships customarily became the surgeon&#39;s operating room during battle. The wo unded began to com e dow n before the Lawrence opened her battery. . .it seemed as though heaven and earth were at loggerheads. For more than two long hours, little could be heard but the deafening thunders of our own broadsides, the crash of balls dashing thro ugh our timbers, and the shrieks of the wo unded . These were brought down faster than I could attend to them , fa rther than to stay the bleeding, or support the sh attered limbs with splints, and pass them forward upon the berth deck. -Usher Parsons