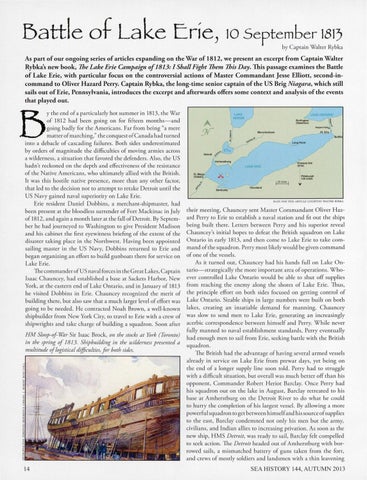 As part of our ongoing series of articles expanding on the War of 1812, we present an excerpt from Captain Walter Rybka&#39;s new book, The Lake Erie Campaign of1813: I Shall Fight Them This Day. This passage examines the Battle of Lake Erie, with particular focus on the controversial actions of Master Commandant Jesse Elliott, second-incommand to Oliver Hazard Perry. Captain Rybka, the long-time senior captain of the US Brig Niagara, which still sails out of Erie, Pennsylvania, introduces the excerpt and afterwards offers some context and analysis of the events that played out.

y the end of a particularly hot summer in 1813, the War LAK Pl ~URON Burtlnglon of 1812 had been going on for fifteen months-and (Hamilton) going badly for the Americans. Far from being &quot;a mere Moravlanlown Ft.Erle matter of m arching,&quot; the conquest of Canada had turned Buffal Long Point into a debacle of cascading failures. Both sides underestimated by orders of magnitude the difficulties of moving armies across Detroit ,joV-&#39;Â°. a wilderness, a situation that favored the defenders. Also, the US ~mherstburg Presque Isle (Erle) hadn&#39;t reckoned on the depth and effectiveness of the resis tance AKE ERi of the Native Americans, who ultimately allied with the British. : Pittsburgh : 120mlles It was this hostile native presence, more than any other factor, ~ Cleveland that led to the decision not to attempt to retake Detroit until the Sandusky US Navy gained naval superiority on Lake Erie. MA PS FO R THJ S ARTICLE COURTESY WALT ER RY BKA Erie resident Daniel Dobbins, a merchant-shipmaster, had their meeting, Chauncey sent Master Comm andant Oliver H azbeen present at the bloodless surrender of Fort Mackinac in July ard Perry to Erie to establish a naval station and fit out the ships of 1812, and again a month later at the fall of Detroit. By Septembeing built there. Letters between Perry and his superior reveal ber he had journeyed to Washington to give President Madison C hau ncey&#39;s initial hopes to defeat the British squadron on Lake and his cabinet the first eyewitness briefin g of the extent of the Ontario in early 1813, and then come to Lake Erie to take comdisaster taki ng place in the Northwest. Having been appointed mand of the squadron. Perry most likely wo uld be given command sa iling master in the US Navy, Dobbins returned to Erie and of one of the vessels. began organizing an effort to build gunboats there for service on As it turned out, Chauncey had his hands full on Lake OnLake Erie. tariostrategically the more important area of operations. WhoThe commander of US naval forces in the Great Lakes, Captain ever controlled Lake Ontario wo uld be able to shut off supplies Isaac Chauncey, had established a base at Sackets Harbor, New from reaching the enemy along the shores of Lake Erie. Thus, York, at the eastern end of Lake Ontario, and in January of 1813 the principle effort on both sides foc used on getting control of he visited Dobbins in Erie. Chauncey recognized the merit of Lake Ontario. Sizable ships in large numbers were built on both building there, but also saw that a much larger level of effort was going to be needed . H e contracted Noa h Brown, a well-known lakes, creating an insatiable demand for manning. Ch auncey shipbuilder from New York City, to travel to Erie w ith a crew of was slow to send men to Lake Erie, generating an increasingly shipwrights and take charge of building a squadron . Soo n afte r acerbic correspondence between himself and Perry. While never fully manned to naval establishment standards, Perry eventually HM Sloop-of mzr Sir Isaac Brock, on the stocks at York (Toronto) had enough men to sail from Erie, seeking battle with the British in the spring of 1813. Shipbuilding in the wilderness presented a squadron. multitude of Logistical difficulties, for both sides. The British had the advantage of having several armed vessels already in service on Lake Erie from prewar days, yet being on the end of a longer supply line soon told. Perry had to struggle wit h a difficult situation, but overall was much better off than his opponent, Commander Robert Heriot Barclay. Once Perry h ad his squadron out on the lake in August, Barclay retreated to his base at Amherstburg on the Detroit River to do what he could to hurry the completion of his largest vessel. By allowi ng a more powerful squadron to get between himselfand his source ofsupplies to the east, Barclay condemned not only his men but the army, civilians, and Indian allies to increasing privation. As soon as the new ship, HMS D etroit, was ready to sail, Barclay felt compelled to seek action. The Detroit headed out of Amherstburg with borrowed sails, a mismatched battery of guns taken from the fort, and crews of mostly soldiers and landsmen with a thin leavening