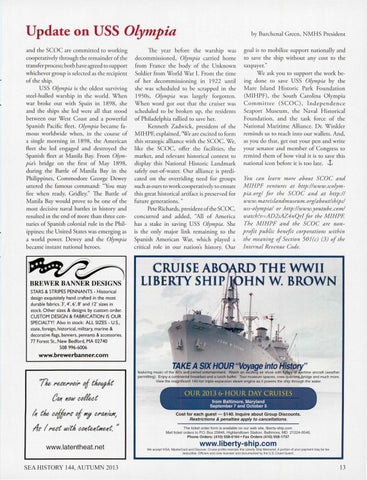 Update on USS Olympia and the SCOC are committed to working cooperatively through the remainder of the transfer process; both have agreed to support whi chever gro up is selected as the recipient of th e ship. USS Olympia is the oldest survi ving steel-hull ed wars hip in the world. Wh en war broke out with Spain in 1898, she and the ships she led were all that stood between our West Coast and a powerful Spanish Pacific Beet. Olympia became famous worldwide when, in the course of a single morning in 1898, the American Beet she led engaged and destroyed the Spanish Beet at Manila Bay. From Olympia&#39;s bridge on the first of May 1898, during the Battle of Manila Bay in the Philippines, Commodore George Dewey uttered the famo us command: &quot;You may fire when ready, Gridley.&quot; The Battle of Manila Bay would prove to be one of the most decisive naval battles in histo ry and resulted in the end of more than three centuries of Spanish colonial rule in the Philippines; the United States was emerging as a world power. Dewey and the Olympia became instant national heroes.

The year before the warship was decommissioned, Olympia carried home from France the body of the Unknown Soldier from World War I. From rhe rime of her decommissioning in 1922 until she was scheduled to be scrapped in the 1950s, Olympia was largely forgotten. When wo rd got our that the cruiser was scheduled to be broken up, the residents of Philadelphia ral lied to save her. Kenneth Zadwick, president of the MIHPF, explained, &#39;We are excited to form this strategic alliance with the SCOC. We, like the SCOC, offer the fac ilities, the marker, and relevant historical context to display this National Historic Landmark safely our-of-water. Our alliance is predicated on the overriding need for gro ups such as ours to work cooperatively to ensure this great historical artifact is preserved for future generations. &quot; Pere Richards, presiden r of the SCOC, concurred and added, &#39;&#39;All of America has a stake in saving USS Olympia. She is the only major link remaining to the Spanish American War, which played a cri tical role in our nation&#39;s history. Our

goal is to mobilize support nationally an d to save the ship without any cost to rhe taxpayer.&quot; We ask yo u to support the work being done to save USS Olympia by th e Mare Island Historic Park Foundation (MIHPF), the South Carolina Olympia Committee (SCOC), Indep en d ence Seaport Museum, the Naval Historical Fo undation, and the task force of the National Maritime Alliance. Dr. Winkler reminds us to reach into our wailers. And, as you do that, get out yo ur pen and write yo ur senator and member of Congress to remind them of how vital it is to save this national icon before it is too late. ~

You can Learn more about SCOC and MIHPF ventures at http://www.scolympia. orgl for the SCOC and at http:!! www. mareisLandmuseum. orglabout!shipsl uss-olympia/ or http://www.youtube.com/ watch?v=AD2sAZ4nQr! for the M IHPF The MIHPF and the SCOC are nonprofit public benefit corporations within the meaning of Section 501 (c) (3) of the Internal Revenue Code.

from Baltimore, Maryland September 7 and October 5 Cost for each guest - $140. Inquire about Group Discounts. Restrictions &amp; penalties apply to cancellations.

www.liberty-ship.com We accept VISA, MasterCard and Discover. Cruise profits maintain this Liberty Ship Memorial. A portion of your payment may be tax deductible. O fficers and c rew licensed and documented by the U.S. Coast Guard.