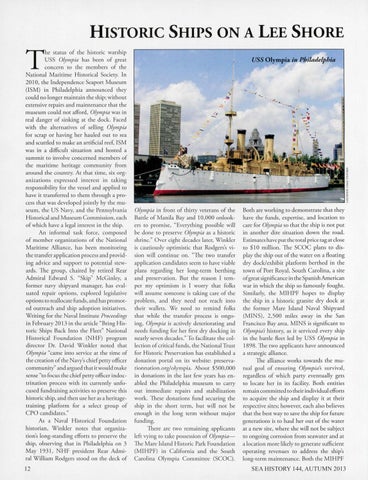 he stams of the historic warship USS Olympia has been of great concern to the members of the National M aritime Historical Society. In 20 10, the Independence Seaport Museum (ISM) in Philadelphia anno unced they could no longer maintain the ship ; without extensive repairs and maintenance that the muse um could not afford, Olympia was in real danger of sinking at the dock. Faced with the alternatives of selling Olympia for scrap or having her hauled out to sea and scuttled to make an artificial reef, ISM was in a difficult situatio n and hosted a summit to involve concerned members of the m aritime heritage community from around the co untry. At that time, six organizations expressed interes t in taking responsibility for the vessel and applied to have it transferred to them through a process that was developed jointly by the museum, the US Navy, and the Pennsylvania H isto rical and Museum C ommissio n, each of which have a legal interest in the ship. An informal task force, composed of member o rganizations of the National M aritime Alliance, has been monitoring the transfer application process and providing advice and suppo rt to potential stewards. The group, chaired by retired Rear Admiral Edward S. &quot;Skip&quot; M cGinley, a former navy shipyard manager, has evaluated repair options, explo red legislative options to reallocate funds, and has promoted outreach and ship adoption initiatives. Writing fo r the Naval Instimte Proceedings in February 201 3 in the article &quot;Bring Historic Ships Back Into the Fleet&quot; National Histo rical Fo undation (NHF) program director Dr. D avid Winkler noted that Olympia &quot;cam e into service at the time of the creation of the Navy&#39;s chief petty officer community&quot; and argued that itwould make sense &quot;to focus the chief petty officer indoctrination process with its currently unfocused fundraising activities to preserve this historic ship, and then use her as a heritagetraining platfo rm for a select group of C PO candidates.&quot; As a N aval Historical Foundation historian, Winkler notes that organization&#39;s long-standing efforts to preserve the ship, observing that in Philadelphia on 3 M ay 193 1, N H F president Rear Admiral William Rodgers stood on the deck of

Olympia in front of thirty veterans of the Battle of M anila Bay and 10,000 onlookers to promise, &quot;Everything possible will be done to preserve Olympia as a historic shrine.&quot; O ver eight decades later, Winkler is cautiously optimistic that Rodgers&#39;s vision will continue o n. &quot;The two transfer application candidates seem to have viable plans regarding her long-term berthing and preservation. But the reason I temper my optimism is I wo rry that fo lks will ass ume someone is takin g care of the problem, and they need not reach in to their wallets. We need to remind fo lks that while the transfer process is ongoing, Olympia is actively deteriorating and needs fundin g for her fi rs t d ry docking in nearly seven decades.&quot; To facilitate the collection of critical funds, the Natio nal Trust for Historic Preservation has established a donation portal on its website: preservation nation.org/olym p ia. About $500,000 in donations in the last few years has enabled the Philadelphia museum to carry out immediate repairs and stabilization work. These do nati ons fund securing the ship in the short term, but w ill not be enough in the long term witho ut m ajor fundin g. There are two rem aining applicants left vying to take possession of OlympiaThe Mare Island Historic Park Foundation (MIHPF) in Cali fo rnia and the South Carolina O lympia Commi ttee (SCOC).

Both are working to demonstrate th at they have the funds, expertise, and location to care fo r Olympia so that the ship is not put in another dire situation down the road. Estimates have put the total price tagat close to $ 10 million . The SCO C p lans to display the ship out of the water on a flo ating dry dock/exhibit platform berthed in the town of Port Royal, So uth Carolina, a site of great signifi cance in the Spanish American war in which the ship so famously fo ugh t. Similarly, the MIHPF hopes to display the ship in a historic granite dry dock at the fo rmer M are Island N aval Shipyard (MI NS), 2,5 00 miles away in the San Francisco Bay area. MINS is significant to Olympia&#39;s history, as it serviced every ship in the battle fleet led by U SS Olympia in 1898. The two applicants have anno unced a strategic alliance. The alliance works towards the m utual goal of ensuring Olympia&#39;s survival, regardless of which party eventually gets to locate her in its facility. Both entities remain committed to their individual efforts to acquire the ship and display it at their respective sites; however, each also believes that the best way to save the ship for future generations is to haul her out of the water at a new site, where she will not be subject to ongoing corrosion from seawater an d at a location m ore likely to generate suffi cient operating revenues to address the ship&#39;s long-term maintenance. Both the MIHPF