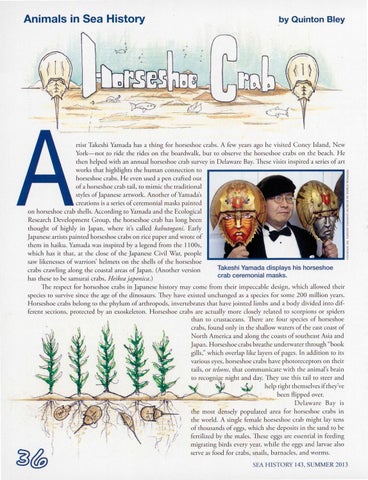 n ist Takeshi Yamada has a thing fo r horseshoe crabs. A few years ago h e visited Coney Island, New York-not to ride the rides on the boardwalk, but to observe the horsesh oe crabs on the beach. H e th en helped with an annual h orseshoe crab survey in Delaware Bay. These visits inspired a series of art wo rks rhat highl ights rhe human connection to horseshoe crabs. H e even used a pen crafted our of a h orseshoe crab tail, to mimic the tradi tional styles of Japanese artwork. Another of Yamada&#39;s creations is a series of ceremonial masks painted on horseshoe crab shells. According to Yam ada and the Ecological Research D evelopment Group, the horseshoe crab has long been thought of highly in Japan, wh ere it&#39;s called kabutogani. Early Japanese artists painted horsesh oe crabs on rice paper and wrote of th em in haiku. Yamada was inspired by a legend fro m the 1100s, which has it that, at the close of the Japan ese Civil War, people saw likenesses of warriors&#39; helmets on the shells of th e horseshoe Takeshi Yamada displays his horseshoe crabs crawling alon g the coas tal areas of Japan. (Anoth er version crab ceremonial masks. has these to be samurai crabs, Heikea japonica.) The respect for horseshoe crabs in Japanese history may come from their impeccable design, which all owed their species to survive since the age of the dinosaurs. 1 h ey have existed unchanged as a species for some 200 million years. H orseshoe crabs belong to the phylum of arthropods, invertebrates that have jointed limbs and a body divided into differe nt sections, p rotected by an exoskeleton . H orseshoe crabs are actually more closely related to scorpions or spiders than to crustaceans. There are fo ur species of h orseshoe crabs, fou nd only in th e sh allow waters of the east coast of No rth America and along the coasts of so utheast Asia and Japan. Horsesh oe crabs breathe underwater through &quot;book gills,&quot; which overlap like layers of pages. In additi on to its various eyes, horseshoe crabs h ave photoreceptors on their rails, or telsons, that communicate with the animal&#39;s brain to recognize night and day. They use this rail to steer and &#39; h elp right themselves if they&#39;ve been flipp ed over. Delaware Bay is rh e most dense,ly populated area for horseshoe crabs in the world. A single female h orseshoe crab might lay tens of thousands of eggs, which sh e deposits in the sand to be fertilized by the m ales. These eggs are essential in feeding migrating birds every year, while the eggs and larvae also serve as foo d for crabs, snails, b arnacles, and worms. SEA HISTORY l43, SUMMER2013