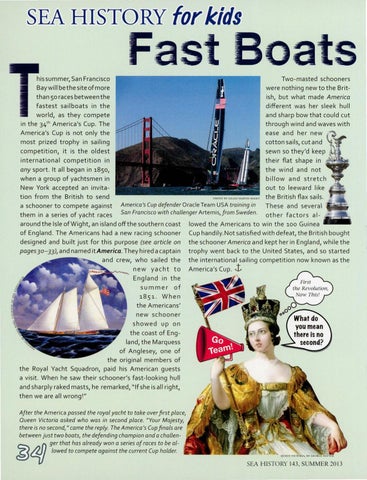 Two-masted schooners were nothing new to the Brit-

than 50 races between the fastest sailboats in the

ish, but what made America different was her sleek hull and sharp bow that could cut through w ind and waves with ease and her new

competition, it is the oldest

their flat shape in

any sport. It all began in

the wind and not billow and stretch out to leeward like

them in a series of yacht races around the Isle of Wight, an island off the southern coast of England . The Americans had a new racing schooner

designed and built just for this purpose (see article on pages30 - 33) 1 and named it America . They hired a capta in and crew, who sailed the new yacht to

the British fla x sails . These and several other factors al -

lowed the Americans to win the 100 Guinea Cup handily. Not satisfied with defeat, the British bought the schooner America and kept her in England, while the trophy went back to the United States, and so started the international sailing competition now known as the America's Cup. !,

England in the summer

showed up on the coast of England, the Marquess of Anglesey, one of the orig inal members of the Royal Yacht Squadron, paid his American guests a visit . When he saw their schooner's fast-looking hull and sharply raked masts, he remarked, "If she is all right, then we are all wrong!" After the America passed the royal yacht to take over first place, Queen Victoria asked who was in second place. " Your Majesty, there is no second, " came the reply. The America's Cup finals are between just two boats, the defending champion and a cha/len ger that has already won a series of races to be al~ lowed to compete against the CU'fent Cup holder

10 Navigating Between Friend and Foe: Jacob Gibson in the War of 1812, by Pete Lesher, illustrations by Marc Castelli • 14 The Cape Horn Ro...

10 Navigating Between Friend and Foe: Jacob Gibson in the War of 1812, by Pete Lesher, illustrations by Marc Castelli • 14 The Cape Horn Ro...