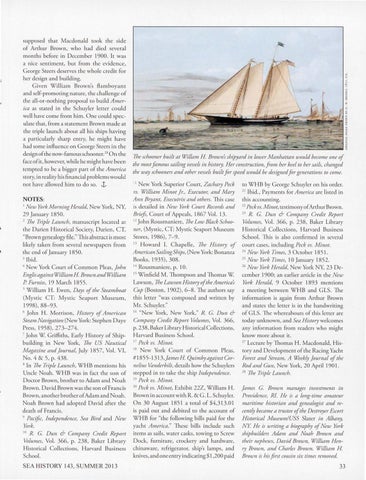 supposed that Macdonald rook the side of Arthur Brown, who had died several months before in D ecember 1900. It was a nice sentiment, bur from the eviden ce, George Steers deserves the whole credit for her design and building. G ive n Wi lli am Brown&#39;s flamboyant and self-promoting nature, the challenge of the all-or-nothing proposal to bui ld America as stated in the Schuyler letter co uld well have com e from him. One co uld speculate that, from a statem ent Brown m ade a t the triple launch abo ut all his ships having a particularly sharp entry, he might h ave had so me influence on Geo rge Steers in the design of the now-famous schooner.28 0 n the face ofit, however, while he might have been tempted to be a bigger part of the America story, in reality his financial problems wo uld not have allowed him to do so. ,!,

The schooner built at Willam H Brown&#39;s shipyard in lower M anhattan would become one of the most famous sailing vessels in history. H er construction, from her keel to her sails, changed the way schooners and other vessels built for speed would be designed for generations to come. 11