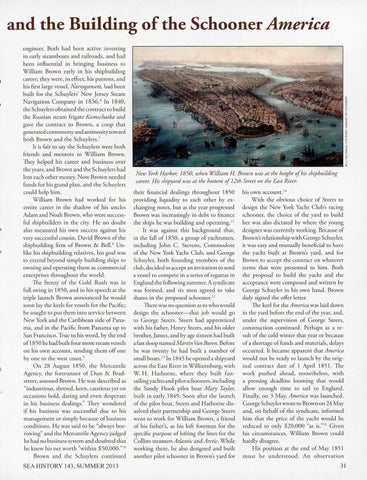 and the Building of the Schooner America engineer. Both had been active investing in early steamboats and railroads, and had been influential in bringing business to William Brown early in his shipbuilding career; they were, in effect, his p atrons, and his first large vessel, Narragansett, had been built for the Schuylers&#39; New Jersey Steam Navigatio n C ompany in 1836.6 In 1840, the Schuylers obtained the contract to build the Russian steam frigate Kamschatka and gave the contract to Brown , a coup that generated controversy and animosity toward both Brown and the Schuylers.7 It is fair to say the Schuylers were both fri ends and m entors to William Brown. They helped his career and business over the years, and Brown and the Schuylers had lent each other money. N ow Brow n needed funds for his grand plan, and th e Schuylers could help him. W illiam Brown had worked for his entire career in the shadow of his uncles Adam and N oah Brown, who were successful shipbuilders in the city. H e no doubt also m easured his own success against his very successful cousin, D avid Brown of the shipbuilding firm of Brown &amp; Bell. 8 Unlike his shipbuilding relatives, his goal was to extend beyond simply building ships to owning and operating them as commercial enterprises throughout the wo rld. The frenzy of the Gold Rush was in full swing in 1850, and in his sp eech at the triple launch Brown announced he wo uld soon lay the keels fo r vessels fo r the Pacific; he sought to put them into service between New Yo rk and the Caribbean side of Panama, and in the Paci fi c from Pan ama up to San Francisco. True to his wo rd, by the end ofl 85 0 he had built four more steam vessels on his own acco unt, sending th em off one by one to the west coast. 9 O n 28 August 185 0, the Mercantile Age ncy, th e fo rerunner of D un &amp; Bradstreet, assessed Brown. He was described as &quot;industrious, shrewd, keen , cautious yet o n occasions bold, daring and even desperate in his business dealings.&quot; They wondered if his business was successful due to his managem ent o r simply because of business co nditions. H e was said to be &quot;always borrowing&quot; and th e Mercantile Agen cy judged he had no business system and do ub ted that he knew his net wo rth &quot;wi thin $50,000 .&quot; 10 Brown and the Schuylers co nti nued

New York H arbor, 1850, when William H. Brown was at the height of his shipbuilding career. H is shipyard was at the bottom of 12th Street on the East River.

their financial dealings thro ughout 185 0 providing liquidity to each o ther by exchanging notes, but as the year progressed Brown was increasingly in debt to fin ance the ships he was building and operating. 11 Ir was against this background that, in the fall of 185 0, a group of yachtsmen, including John C. Stevens, Commodore of th e New Yo rk Yacht C lub, and Geo rge Schuyler, both fo unding members of the club, decided to accept an invitation to send a vessel to com pete in a seri es of regattas in England the following summer. A syndicate was fo rmed, and six men agreed to rake shares in the p roposed schooner. 12 There was no question as to who wo uld design the schooner- that job wo uld go to George Steers. Steers had apprenticed with his fa ther, Henry Steers, and his older brother, Jam es, and by age sixteen had built afastsloopnam ed Martin Van Buren. Before he was twen ty he had built a nu m ber of sm all boats. 13 In 1845 he opened a shipyard across the East Rive r in W illiamsburg, with W. H. H athorne, where they built fas tsailingyachts and pilot schooners, including the Sandy H ook pilo t boat Mary Taylor, built in early 1849. Soon after the launch of the pilot boat, Steers and H athorne dissolved their partnership and Geo rge Steers went to wo rk fo r William Brown , a frie nd of his father&#39;s, as his loft fo rem an fo r the specific purpose of lofting the lines for the Collins steamers A tlantic and Arctic. While working there, he also designed and built another pilot schooner in Brown&#39;s yard fo r

his own acco unt. 14 W ith the obvious choice of Steers to design the New Yo rk Yacht C lub&#39;s racing schooner, the choice of the yard to build her was also dictated by where the yo ung designer was currently wo rking. Because of Brown&#39;s relationship with Geo rge Schuyler, it was easy and mutually beneficial to have the yacht built at Brown&#39;s yard, and for Brown to accept the contract on whatever terms that were presented to him. Both the proposal to build the yacht and the acceptance were composed and written by Geo rge Schuyler in his own hand. Brow n duly signed the offer letter. The keel for the America was laid down in the yard before the end of the year, and, under the supervision of George Steers, constructio n co ntinued. Perhaps as a result of the cold winter that year or because of a shortage of funds and m aterials, delays occurred. It becam e apparent that America wo uld no t be ready to launch by the original con tract date of 1 April 1851. The wo rk pushed ahead, non etheless, with a pressing deadline looming that wo uld allow enough time to sail to England. Finally, on 3 May, America was launched . George Schuyler wrote to Brown on 24 M ay and, on behalf of the syndicate, info rmed him that the p rice of the yacht would be reduced to only $20,000 &quot;as is.&quot; 15 Given his circumstances, William Brown could hardly disagree. His position at the end of M ay 18 51 must be unders tood . An ob se rva tio n