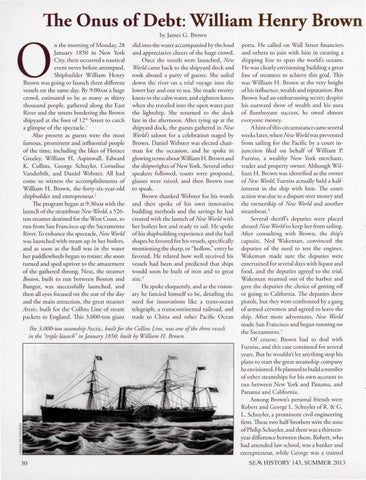 The Onus of Debt: Willialll Henry Brown by Jam es G . Brown n the morning of Monday, 28 January 1850 in New York C ity, there occurred a nautical event never before attempted . Shipbuilder William Henry Brown was going to launch three different vessels on the same day. By 9:00AM a huge crowd, estimated to be as many as thirty tho usand people, gathered alo ng the East River and the streets bordering th e Brown shipyard at the foot of 12&#39;h Street to catch a glimpse of the spectacle. 1 Also present as guests were the m ost famous, prominent and inBuential people of the time, including the likes of Horace Greeley, William H . Aspinwall , Edward K. C ollins, George Schuyler, Cornelius Vanderbilt, and Daniel Webster. All had come to witness the accomplishments of William H. Brown, the forty-six-year-old shipbuilder and entrepreneur.2 The program began at 9:30AM with the launch of the steamboat New World, a 526to n steam er destined for the Wes t Coast, to run from San Francisco up the Sacram ento River. To enhan ce the spectacle, New World was launched with steam up in her boilers, and as soon as the hull was in the water her paddlewheels began to ro tate; she soon turn ed and sped upriver to the am azem ent of the gathered throng. N ext, the steam er Boston, built to run between Boston and Bangor, was successfully launched, and then all eyes focused on the star of the day and the main attraction, the great steam er A rctic, built for the Collins Line of steam packets to England. This 3,000-ton giant

slid into the wa ter acco mpanied by the loud and appreciative cheers of the huge crowd. O nce the vessels were launched, New World came back to the shipyard dock and rook aboard a party of guests. She sailed down the river on a trial voyage into the lower bay and out to sea. She made twen ty kno ts in the calm water, and eighteen kno ts when she traveled into the open water past the lightship. She returned to the dock late in the afternoon. After tying up at the shipyard dock, the guests gathered in New World&#39;s saloon for a celebration staged by Brown. D aniel Webster was elected chai rman for the occasion , and he spoke in glowing terms about William H. Brown and the shipwrigh ts of New York. Several other speakers fo llowed, toas ts were proposed, glasses were raised, and then Brown rose to speak. Brown thanked Webster for his words and then spoke of his own innovative building methods and the savings he had created with the launch of New World with her boilers hot and ready to sail. H e spoke of his shipbuilding experience and the hull shapes he favo red fo r his vessels, specifically mentio ning the sharp, or &quot;hollow,&quot; entry he favo red . H e related how well received his vessels had been and predicted that ships wo uld soon be built of iron and to great size.3 H e spoke eloquently, and as the visionary he fancied himself to be, derailing the need for innovations like a trans-ocean telegraph, a transcontinental railroad, and trade to China and other Pacific Ocean

The 3, 000-ton steamship Arctic, built for the Collins Line, was one of the three vessels in the &quot;triple launch&quot; in January 1850, built by William H. Brown.

pons . He called o n Wall Street fin anciers and o thers to join with him in creating a shipping line to span the wo rld &#39;s oceans. H e was clearly envisio ning building a great line of steamers to ach ieve this goal. This was W ilJiam H . Brown at the very height ofhis inBuence, wealth and reputatio n. But Brown h ad an embarrassing secret; despite his outward show of wealth and his aura of flamboyant success, he owed almost everyon e mo ney. A hint of this circumstance came several weeks later, when New World was prevented from sailing fo r the Pacific by a court injunctio n filed o n behalf of William P. Furniss, a wealthy New York merchant, trader and property owner. Although W illiam H. Brown was identified as the owner of New World, Furniss actually held a halfinterest in the ship with him. The courr actio n was due to a dispute over money and the ownership of New World and another steamboat. 4 Several sheriffs deputies were placed aboard New Wo rld to keep h er from sailing. After consulting with Brown, the ship&#39;s captain, Ned Wakeman , convinced the deputies of the need to test the engines. Wakem an made sure the deputies were entertained fo r several days with liqu or and foo d, and the deputies agreed to the trial. Wakem an steam ed out of the harbor and gave the de puties the choice of getting off or going to Califo rnia. The deputies drew pistols, but they were confronted by a gang of armed crewmen and agreed to leave the ship. After mo re adventures, New World made San Francisco and began running on the Sacram ento. 5 Of course, Brown had to deal with Furniss, and this case continued for several years. But he wouldn&#39;t let anything stop his plans to start the great steamship co mpany he envisioned. H e planned to build a num her of other steamships for his own account to run between New York and Panama, and Panama and Cal ifo rnia. Amo ng Brown&#39;s personal friends were Robert and Geo rge L. Schuyler ofR. &amp; G . L. Schuyler, a prominent civil engineering firm. These two hal f- brothers were the sons of Philip Schuyler, and there was a thirteenyear difference between them. Robert, who had attended law school, was a banke r and entrepre neur, while George was a trained