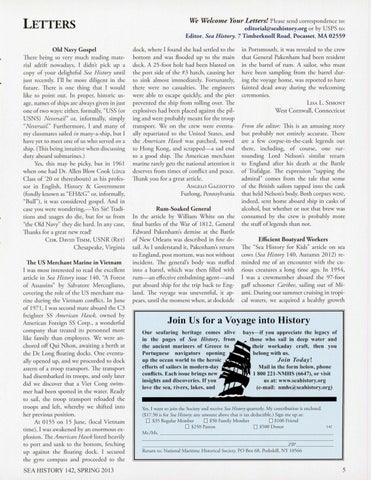 LETTERS Old Navy Gospel There being so very much reading material adrift nowadays, I didn&#39;t pick up a copy of your delightful Sea History until just recently. I&#39;ll be more diligent in the future. There is one thing that I would like to point our. In proper, historic usage, names of ships are always given in just one of rwo ways: either, formally, &quot;USS (or USNS) Neversail&quot; or, informally, simply &quot;Neversail.&quot; Furthermore, I and many of my classmates sailed in many-a-ship, bur I have yet to meet one of us who served on a ship. (This being intuitive when discussing duty aboard submarines.) Yes, this may be picky, bur in 1961 when one had Dr. Allen Blow Cook (circa C lass of &#39;20 or thereabouts) as his professor in English, History &amp; Government (fondly known as &quot;EH&amp;G &quot; or, informally, &quot;Bull&quot;), it was considered gospel. And in case you were wondering,-Yes Sir! Traditions and usages do die, bur for us from &quot;the Old Navy&quot; they die hard. In any case, Thanks for a great new read! CoR DAVID TrMM, USNR (RET) Chesapeake, Virginia The US Merch ant Marine in Vietnam I was most interested to read the excellent article in Sea H istory issue 140, &quot;A Forest of Assassins&quot; by Salvatore M ercogliano, covering the role of the US merchant marine during the Vietnam conflict. In June of 1971, I was second mare aboard the C3 freighter SS American Hawk, owned by American Foreign SS Corp. , a wonderful company that treated its personnel more like family than employees. We were anchored off Q ui Nhon, awaiting a berth at the De Long float ing docks. One eventually opened up, and we proceeded to dock astern of a troop transport. The transport had disem barked its troops, and only later did we discover that a Vier Cong swimmer had been spotted in the water. Ready to sail, the troop transport reloaded the troops and left, whereby we shifted into her previous position. Ar 0155 on 15 June, (local Vietnam rime) , I was awakened by an enormous explosion. The American Hawk listed heavily to port and sank to the bottom, fetching up against the floating dock. I secured the gyro compass and proceeded to the SEA HISTORY 142, SPRING 20 13

&quot;Ule &quot;U!elcom e Yo u r Letters! P lease send correspondence ro : editorial@seahistory.org o r by USPS to: Editor, Sea History, 7 Timberknoll Road, Pocasset, MA 02559 dock, where I fo und she had serried to the bottom and was flooded up to the main deck. A 25-foor hole had been blasted on the port side of the #3 hatch, causing her to sink almost immediately. Fortunately, there were no casualties. The engineers were able to escape quickly, and the pier prevented the ship from rolling over. The explosives had been placed against rhe piling and were probably meant for the troop transport. We on the crew were eventually repatriated to the United States, and the American Hawk was parched, rowed to Hong Kong, and scrapped-a sad end to a good ship. The American merchant marine rarely gets the national attention it deserves from rimes of conflict and peace. Thank you for a great article. ANGELO GAZZOTTO

Furlong, Pennsylvania Rum-Soaked Gen eral In the article by William White on the final battles of the War of 1812, General Edward Pakenham&#39;s demise at the Barde of New Orleans was described in fine derail. As, I understand it, Pakenham&#39;s return to England, post mortem, was nor without inciden t. The general&#39;s body was stuffed into a barrel, which was then filled with rum-an effective embalm ing agent-and put aboard ship for the trip back to England. The voyage was uneventful, it appears, until the moment when, at dockside

in Portsmo uth, it was revealed to the crew that General Pakenham had been resident in the barrel of rum. A sailor, who must have been sampling from th e barrel during the voyage home, was reported to have fainted dead away d uring the welcoming ceremonies. L ISA

West Cornwall, Connecticut From the editor: This is an amusing story bur probably not entirely accurate. There are a few corpse-in- the-cask legends our there, including, of course, one surrounding Lord Nelson&#39;s similar return to England after his death at the Barde of Trafalgar. The expression &quot;rapping rhe admiral&quot; comes from the tale that some of the British sailors rapped into the cask that held Nelson&#39;s body. Both corpses were, indeed, sent h ome aboard ship in casks of alcohol, bur whether or nor that brew was consumed by the crew is probably more the stuff of legends than not. Efficient Boatyard Workers The &quot;Sea H istory for Kids&quot; article on sea cows (Sea History 140, Autumn 2012) reminded me of an encounter with the curio us creatures a long rime ago. In 1954, I was a crewmem ber aboard the 97-foor gaff schooner Caribee, sailing our of Miami. Duri ng our summer cruising in tropical waters, we acquired a healthy growth

Join Us for a Voyage into History Our seafaring heritage comes alive in the pages of Sea History, from the ancient mariners of G reece to Portuguese navigators opening up the ocean world to the heroic efforts of sailors in modern-day conflicts. Each issue brings new insights and discoveries. If you love the sea, rivers, lakes, and

bays-if you appreciate the legacy of those who sail in deep wa ter a nd their workaday craft, then you belong with us. Join Today ! Mail in the form below, phone 1 800 221-NMHS (6647), or visit us at: www.seahistory.org (e-mail: nmhs@seahistory.org)