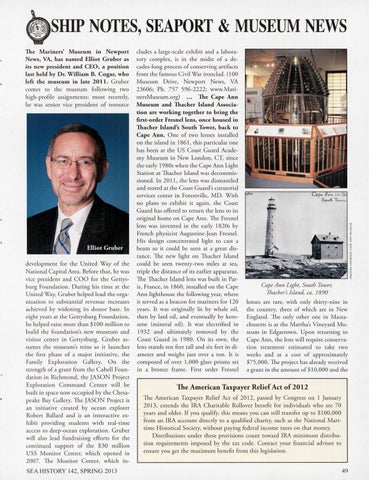 .SHIP NOTES, SEAPORT &amp; MUSEUM NEWS The Mariners&#39; Museum in Newport News, VA, has named Elliot Gruber as its new president and CEO, a position last held by Dr. William B. Cogar, who left the museum in late 2011. Gruber comes to the museum following two high-profile assignments: most recen tly, he was senior vice president of resource

development for the United Way of the National Capital Area. Before that, he was vice president and COO for the Gettysburg Fo undation. During his time at the U nited Way, G ruber helped lead the organization to substantial revenue increases achieved by widening its donor base. In eight years at the Getrys burg Foundation, he helped raise m ore than $ 100 million to build the fo undation&#39;s new museum and visitor center in Getrys burg. Gruber assumes the museum&#39;s reins as it launches the first phase of a major initiative, the Family Exploration Gallery. On the strength of a grant from the Cabell Foundatio n in Richmond, the JASON Project Exploration Command Center will be built in space now occupied by the Chesapeake Bay Gallery. The JASON Project is an initiative created by ocean explorer Robert Ballard and is an interactive exhibit providing students with real-time access to deep-ocean exploration. Gruber wi ll also lead fundraising efforts for the continued support of the $3 0 million USS Monitor Center, which opened in 2007. The Monitor Center, which inSEA HISTORY 142, SPRING 2013

eludes a large-scale exhibit and a laboratory complex, is in the midst of a decades-long process of conserving artifacts from the famous Civil War ironclad. (100 Museum Drive, Newport News, VA 23606; Ph. 757 596-2222; www.MarinersMuseum.org) The Cape Ann Museum and Thacher Island Association are working together to bring the first-order Fresnel lens, once housed in Thacher Island&#39;s South Tower, back to Cape Ann. One of two lenses installed on the island in 1861, this particular one has been at the US Coast Guard Academy Museum in New London, CT, since the early 1980s when the Cape Ann Light Station at Thacher Island was decommissioned . In 2011, the lens was dism an tled and stored at the Coast Guard&#39;s curatorial services center in Forestville, MD. With no plans to exhibit it again, the Coast Guard has offered to return the lens to its original home on Cape Ann . The Fres nel lens was invented in the early 1820s by French phys icist Augusti ne-Jean Fresnel. His design concentrated light to cas t a beam so it could be seen at a great distance. The new light on Thacher Island could be seen twenry-two miles at sea, triple the distance of its earlier apparatus. The Thacher Island lens was built in Paris, France, in 1860, installed on the Cape Ann lighthouse the following year, where it served as a beacon for mariners for 120 years. Ir was originally lit by whale oil, then by lard oil, and eventually by kerosene (mineral oil) . Ir was electrified in 1932 and ultim ately rem oved by the Coast G uard in 1980. On its own, the lens stands ten feet tall and six feet in diameter and weighs just over a ton. It is composed of over 1,000 glass prisms set in a bronze fram e. First o rder Fresnel

Cape Ann Light, South Tower, Thacher&#39;s Island, ca. 1890 lenses are rare, with only thirty-n ine in the country, three of which are in New England. The only other one in Massachusetts is at the Martha&#39;s Vineyard Museum in Edgartown. Upon returning to Cape Ann, the lens wi ll require conservation treatment estimated to take two weeks and at a cost of approximately $75,000 . The project has already received a grant in the amount of$10,000 and the

The American Taxpayer Relief Act of 2012 The American Taxpayer Relief Act of 20 12, passed by Co ngress on 1 January 2013, extends the IRA C hari table Rollover benefit for individuals who are 70 years and older. If yo u qualify, this means you can still transfer up to $ 100,000 from an IRA account directly to a qualified chariry, such as the National Maritime Historical Society, without paying federal income taxes on that money. Distributions under these provisions count toward IRA minimum distribution requirements imposed by the tax code. Contact your fin ancial advisor to ensure you get the m aximum benefit from this legislation.