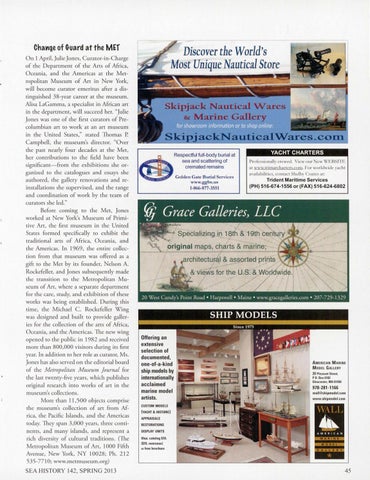 Chat&quot;tge of G-uard at the ME! On 1 April, Julie Jones, Curator-in-Charge of the Department of the Arts of Africa, Oceania, and the Americas at the Metropolitan Museum of Art in N ew York, will beco me curator emeritus after a distinguished 38-year career at the museum. Alisa LaGamma, a specialist in African art in the department, will succeed her. &quot;Jul ie Jones was one of the first curators of Precolumbian art to work at an art museum in the United States,&quot; stated Thomas P. Campbell, the museum&#39;s directo r. &quot;Over the past nearly four decades at th e Met, her contributions to the field have been significant- from the exhibitions she organized to the catalogues and essays she authored, the gallery renovations and reinstallations she supervised, and the range and coordination of work by the team of curators she led.&quot; Before coming to the Met, Jones worked at New York&#39;s Museum of Primitive Art, the first museum in the United States formed specifically to exhibit the traditional arts of Africa, Oceania, and the Americas. In 1969, the entire collection from that museum was offered as a gift to the Met by its found er, Nelson A. Rockefeller, and Jones subsequently made the transition to the Metropolitan Museum of Art, where a separate department for the care, study, and exhibition of these works was being established. During this time, th e Michael C. Rockefeller W ing was des igned and bu ilt to provide galleries for the collection of the arts of Africa, Oceania, and the Americas. The new wing opened to the public in 1982 and received more than 800 ,000 visitors during its first year. In addition to her role as curator, M s. Jones has also served on the editorial board of the Metropolitan Museum journal for the last twenty-five years, which publishes original research into works of art in the museum&#39;s collections. More than 11,500 objects comprise the museum&#39;s collection of art from Africa, the Pacific Island s, and the Americas today. They span 3,000 years, three co ntinents, and many islands, and represent a rich diversity of cultural traditions. (The Metropolitan Museum of Art, 1000 Fifth Avenue, New York, NY 10028; Ph. 2 12 535-77 10; www.metmuseum.org)